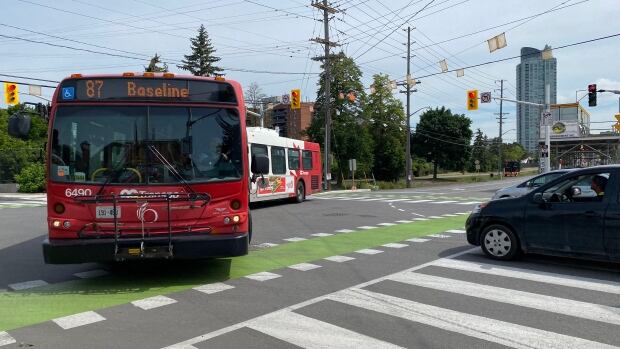 A noisy bridge forced OC Transpo to abandon a Transitway detour in Westboro and instead run buses on Richmond Road on Thursday.

The temporary Bailey Bridge, located at the north end of Roosevelt Avenue on the Scott Street Extension, was intended to carry bus traffic from Westboro to Dominion stations during Phase 2 of LRT construction. It opened Sunday morning.

In a Thursday morning blog post, the adviser. Jeff Leiper said he was on the first bus to cross the bridge and immediately noticed “a loud noise…especially when [buses] pass over the lip separating the bridge span from the roadway. »

Leiper told CBC that for people living near the bridge, the noise is unacceptable.

“For these residents here, it’s like having a thunderclap right outside your window, 24 hours a day. At rush hour, when hundreds of buses pass by in an hour, it’s a cacophony of very discordant sounds” , Leiper said, pointing to nearby homes. on Workman, Winston and Roosevelt avenues.

He said that although the detour has been discussed for years and a noise barrier has been installed along the bridge, this particular disturbance came as a surprise.

“We were anticipating things like engine noise, brake noise and exhaust noise,” he said. “I don’t know who, if anyone, anticipated the sound of wheels hitting a steel lip.”

Leiper said there was also a rumble as buses passed over the bridge.

“It reminded me of a bomb”

People living near the temporary bridge confirmed that the noise that started on Sunday morning was shocking.

“At first I thought it was thunder,” said Joann Michels, who has lived nearby for 31 years. “I had all my windows closed because it was so hot earlier in the week, then when I opened them I thought, oh no, it’s that bridge.”

Khalil Merhi, who has lived nearby for nine years, said he and his wife had to change rooms to get away from the “unbearable” noise.

“I lived in Beruit, so it reminded me of a bombshell, like boom! It was just like, what the hell is that?” Meri said. “I think the bus driver, if he lived here, would complain about the driving.”

Leiper said he had contacted the LRT team “to alert them to the very discordant noise being produced”, and said his office had been in “frequent contact” over the past few days. CBC News has asked the city for more information about the bridge, but has yet to hear back.

“The neighborhood cannot be asked to tolerate this over the several years of construction, and I fully support the decision to implement the detour away from the bridge,” he wrote in his blog post.

The decision to reroute the buses was made Wednesday evening, Leiper said.

It’s unclear how long the detour will remain in place, or what solutions are available, Leiper said.

“It will probably be several days before I can begin to communicate responses. In the meantime, however, adjacent neighbors will be able to sleep.”

“We will only know the effect of adding buses to the mix,” Leiper wrote. “Based on my observations on Wednesday afternoon, peak PM traffic is moving well now, and I hope the effect of the addition of buses staggered by the Churchill fire will not impact too much. important, but time will tell.”

Since the detour will bypass Dominion Station, Leiper has asked OC Transpo to maintain some service to Richmond and Roosevelt.

Leiper said for local residents and OC Transpo riders who now face detours as they pass through his neighborhood, it’s critical that a solution be found quickly.

“At this point, I don’t know what the timelines are, and that’s obviously one of my most pressing questions,” he said.

Leiper warned that the bus diversion “will not be sustainable for the duration of LRT construction,” and said it was “critical” that the bridge issue be resolved as quickly as possible.

“I think it’s probably solvable with an engineering solution, but it’s going to take some time. I was hopeful at the start of the week that they could fix it soon. I’m very happy that when OC Transpo realized the fix was not going to be quick that they closed it, they diverted the buses.”

Merhi said he and his neighbors were prepared to endure the construction and disturbance for a few years, but not the noise.