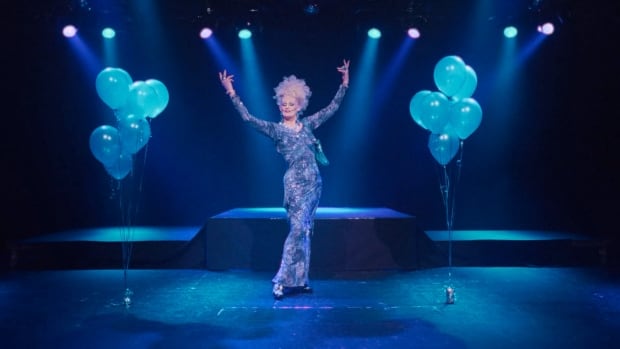 Cutting planes is a series of personal essays where filmmakers tell how their film was made. This is one of 5 directors’ essays presented at the 2022 Inside Out Film Festival 2SLGBTQ+.

In 2018, I was doing research for behind the facade, a series of short films produced by my company Lantern Films about the untold stories of British Columbia. More than one person had suggested that Oliv Howe was the person to talk to about Vancouver’s queer scene in the 1980s.

When we first met, Oliv shared stories from 1981 – the year she was elected 10th Empress of Vancouver by the Dogwood Monarchist Society. I learned that 1981 culminated with Oliv appearing at the front of Canada’s first official Pride Parade. She was wearing a wedding dress. AIDS had yet to destroy the party, and it seemed the possibilities for a queer future were endless.

I was struck by Oliv’s incredible and unusual ability to remember the past in vivid detail. His quick wit and directness were intoxicating, especially for someone like me who struggles with an almost compulsive need to please others.

I excitedly returned to the Lantern Films office and told my business partner and producer Jessica Hallenbeck that I had met someone whose story was far longer than a short – she deserved her own feature. footage.

We started digging into the archives, initially worried that there was little visual material to support the telling of this story. It was a good thing to worry about – it was illegal to take photos in gay bars in the 1980s.

Little did we know that this search would turn into a two-year-old rabbit hole obsession that would uncover thousands of never-before-seen photographs and films from the era. We learned that the talented photographer and artist Oraf Oraffson had skillfully photographed Oliv every day before and during his reign in 1981. His work took our breath away and co-editor Hân Phạm digitized over 8000 photos of his 1981 photographs .

We knew we had a one-of-a-kind person to share with the world, a remarkable untold story, and a treasure trove of never-before-seen archival material. Now all we needed was funding.

Jessica was determined to find funding, but it was not an easy task. We had never done a feature film before and were considering something new – a historical biopic with drag performances. We have prepared a strong pitch and a number of funders — CBC, NFB, Knowledge Network and Crave — have expressed interest. In the end, they each succeeded. We were told to include more of Oliv’s “groovy” backstory, or move the film to be exclusively about flirting.

Several makers told us the absurdly offensive reason for not greenlighting the movie “we already have a trans movie.” In one instance, the potential backer said he wasn’t sure Oliv’s personality would resonate with his audience. As I write this, I hear Oliv’s voice saying, “don’t be that kind of fag, be that nice kind of fag”.

The Empress of Vancouver is partly the story of homonormativity versus homonormativity. Oliv used that term early in production, and it resonated with me. “Homonormativity” is a process of gay normalization by cisgender, white, able-bodied, and affluent gays and lesbians who have come to define the boundaries of homosexuality. Gays and lesbians have spent decades seeking equal status in the courts and in the hearts and minds of the public, but in the process of seeking approval, we have failed at best to celebrate the immensity of community and at worst, excluded people from the movement. .

As Oliv jokingly pointed out, I look like the iconic child of homonormativity. In 2001, I was a litigant in the lawsuit to legalize marriage for gay and lesbian couples in Canada. I am now married, have a 6 year old son, a dog and generally wear button down shirts. Yet this larger vision of homosexuality – which was defined and embodied in 1981 – is one of the things that I wanted to center in the film and spark an intergenerational conversation about it.

Jessica called me in the summer of 2020 to tell me that the film had finally found funding through Telus Originals. The budget was tight, especially given our expanded vision for the film, and the schedule was even tighter, but I had no idea at the time how lucky we were. Christina Willings, production manager at Telus, defended the film at every turn. Because of her personal connection to the community, she understood the importance of history and the value of Oliv’s perspective to queer history. We were allowed to make the film we wanted to make.

In January 2021, in the midst of a pandemic, we started filming. Every Friday night, Oliv took to Vancouver’s Davie Village in drag, her handmade outfits wow passers-by and bring joy to residents during a dark time. In the film, Oliv describes these Friday night performances as a form of social therapy. For me, it was like going from black and white to color. A chance to see and be part of a world where the boundaries of homosexuality are endless. Filming these nights has become a welcome ritual for us, a way for us to create a film in a dark time.

For me The Empress of Vancouver was a chance to celebrate Oliv’s daily life, a chance to help tell this incredible untold story of our own history as a movement. An opportunity to develop a new language for queer cinema.

The film is a celebration of friendship and the value of nonconformity, and a reminder that history happens on the fringes. And to top it off, it’s backed by a stunning original score by Cindy Lee/Pat Flegel. In short, it’s a hell of a good time.

The Empress of Vancouver screens in Toronto during the Inside Out 2SLGBTQ+ film festival on Tuesday, May 31. It is available to stream across Ontario from May 26 to June 5.