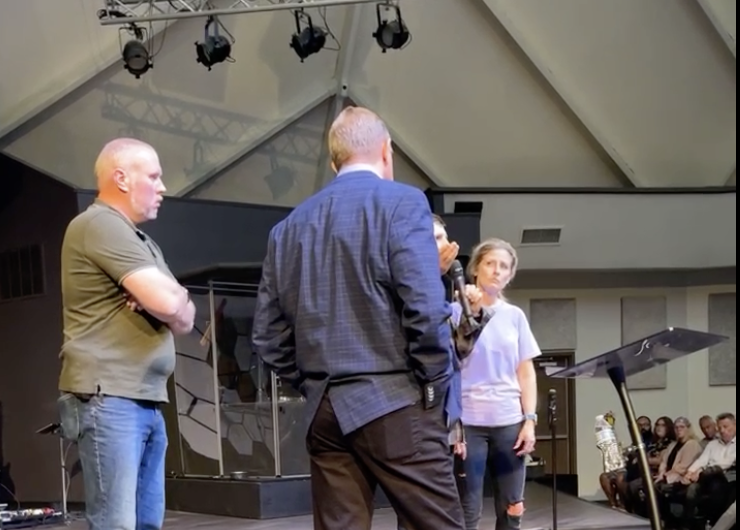 John Lowe II, Indiana church pastor, confessed he had committed “adultery” twenty years ago when a woman in the congregation quickly corrected him – she was only SIXTEEN when the 65-year-old man picked on her. “The lies and manipulation must stop” Bobi Gephart told him in front of the whole church.

The incident went viral after a family member uploaded the woman’s brave confession to Facebook.

In the video with more than 350,000 views, Bobi Gephart, 43, stepped up to a microphone. She told their church in Warsaw, Indiana, how Pastor Lowe nursed her as a teenager. She said the abuse started when she was 16. Sixteen is the legal age of consent in the state. Unfortunately, the woman who was on stage with her husband said the memories of the pastor still traumatized her. She accused him of taking her virginity to his church office and making other sexual advances to her afterwards.

“For 27 years I lived in a prison…I lived in a prison of lies and shame. Lying to protect the Lowe family. For years I thought I was a horrible person, having suicidal thoughts and not realizing what had really been done to me.

The woman also revealed that her brother motivated her to tell what happened.

“I would still be in jail if my brother hadn’t approached me two weeks ago with what he saw as a teenager that had bothered him all those years: his pastor in bed with his little sister.”

Pastor Lowe II had just told the church that he had “sinned” 20 years ago by committing adultery, without mentioning the age of the woman or daughter. He asked the congregation to forgive him for the “deep wound” he had caused by “sin”.

After Bobi Gephart spoke, Lowe returned to the microphone and admitted his involvement with her as a teenager was a fact. The Kosciusko County District Attorney’s Office confirmed to WANE 15 on Monday that an investigation is ongoing into the matter.

John Lowe II, a pastor at the church in Indiana, told his congregation on Sunday that he committed adultery about 20 years ago

Moments later, a woman stepped forward from the audience and said he sexually assaulted her when she was 16 https://t.co/H7ms8LciJq pic.twitter.com/W220TXz34F

Church issues sympathy statement for pastor and woman he assaulted

On Monday, the church released a statement regarding the incident on its Facebook page.

“As a result of what has just been revealed, we are hurt and broken for a woman who lovingly attended and served the church for many years, and for her husband and family. It is our prayer. deepest love and our commitment to love, support, encourage and help her through a healing process in any way we can. New Life is also dedicated to ministry to and with all of our members during this difficult season, so that we can not only survive this, but together experience abundant grace, the healing of unity – all for the glory of God and the preservation of his church.

Our brokenness also extends to Pastor John B. Lowe II, his wife and family. For 42 years, New Life has taught and preached an intersecting message of repentance, forgiveness and restoration; a ministry of reconciliation that was both led and modeled by pastors John and Debbie Lowe. As healing happens in their heart. Their marriage and family, we pledge to demonstrate the same support, encouragement, guidance, and forgiveness that has defined the collective heart and ministry of this body. On Monday, May 23, 2022, Pastor John B. Lowe II tendered his resignation with New Life Christian Church and World Outreach.