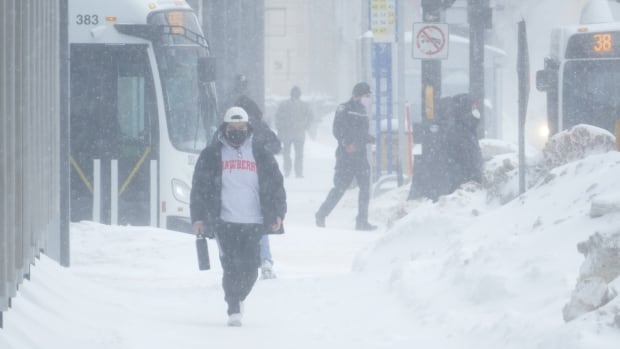 The blustery conditions swirling across southern Manitoba has closed various highways, including the road circling Winnipeg.

The adverse weather has prompted the closures of the Perimeter Highway around Winnipeg, as well as the westbound lanes of the Trans-Canada Highway from Headingley to Portage la Prairie.

Other highway closures include:

Environment Canada has issued a blizzard warning for parts of the region Saturday, as it forecasts strong southerly winds picking up speed, approaching 50 kilometers per hour, by midday.

These forecast winds will produce blizzard-like conditions with poor visibility through the afternoon, Environment Canada says.

The winds will ease by the evening, but will be replaced by a mass of snow moving toward the south and out of the province, the federal agency reports.

As much as 10 to 15 cm of snow is forecast in some areas, particularly around the Whiteshell, Lac du Bonnet and Victoria Beach. It’s expected the heavy snow will begin Saturday afternoon and gradually fizzle out by Sunday morning.

Winds picking up on Sunday

On Sunday, moderate northwest winds of 40 to 50 km/h will develop over the Red River Valley as a colder air mass pushes into the area, Environment Canada forecasts. It will result in more blowing snow, but gradually taper off as the wind weakens.

The agency is also warning that travel may be hazardous due to reduced visibility.