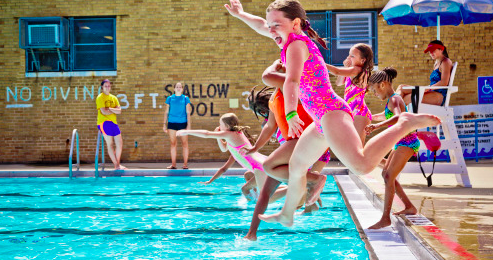 As the school year draws to a close, many Philadelphia kids and parents will turn to the city’s public swimming pools for a safe and fun place to cool off on hot summer days.

But due to a shortage of lifeguards, it is not yet known how many of the city’s 65 swimming pools will open or what their hours will be.

The Parks and Recreation Department needs to hire about 60 more guards to keep its pools operating at full capacity this summer, FOX29 reports.

At this point, it has enough staff to open about two-thirds of its pools. The Lederer Pool in Fishtown will be the first to open on Independence Day.

The shortage has led a 70-year-old former lifeguard to return to the job she first worked when she was 16. Robin Borlandoe worries about the city’s children given the gun violence crisis facing Philadelphia.

“They need something…to do,” she told CBS3. “We have to bring it back to the old days… We dodged dodgeballs, not bullets.”

When Jessica deRivera was a lifeguard at the Feltonville Municipal Pool in the 2000s, she quickly realized how important the facility was to working-class families.

“Kids whose parents couldn’t afford summer camp, or even air conditioning, showed up seven days a week, rain or shine,” she wrote. in an editorial for Billy Penn.

Lifeguards typically earn $16 an hour and work 35 hours a week through August.

Anyone 16 years of age or older can become a lifeguard. Applicants don’t even need to know how to swim. The Parks & Rec department offers to teach people, reports the Inquirer.

Additionally, applicants under 24 do not need to pay to be certified as a lifeguard, which typically costs $110.

Being a lifeguard can be a job, but deRivera said it’s especially fun.

“I loved making my first real money,” she said. “Even obvious inconveniences like boredom or heat were punctuated by funny things our regulars were saying while I taught them how to kick, or finding a $5 meal tray at the Dominican spot. ”

Those interested in becoming the position can learn how to apply on the city’s website. The process includes several swim tests and a lifeguard certification course.