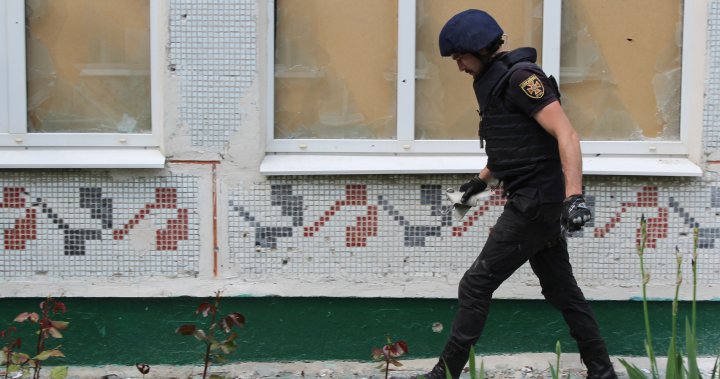 KHARKIV, Ukraine – The rocket came out of the ground behind an industrial building. Warned by local residents, workers wearing helmets and bulletproof vests arrived in a truck to remove it.

They found another rocket on the roof and extracted a third from the kitchen of a destroyed apartment. Fragments of another were embedded in a playground behind a day care centre.

After more than three months of attacks by Russian forces, Ukraine’s second-largest city is beginning to clean up and restart, but the challenges are daunting and the rockets keep coming.

Although Russia appears to have given up hope of capturing Kharkiv, once the capital of Soviet-era Ukraine, its forces continue to fire on civilian neighborhoods from positions north of the city.

Russian shelling killed nine people on Thursday, including a five-month-old baby. 19 others were injured. The attacks appear to have no purpose beyond harassment.

When asked why he thought Russia was bombing Kharkiv despite the lack of an obvious military objective, one Ukrainian soldier had a simple theory: “Because Putin is an asshole.”

President Volodymyr Zelensky traveled to Kharkiv on Sunday to thank his troops. He said the more than 2,000 homes destroyed in the area would be rebuilt.

“We will restore everything,” he said.

Part of the “New Russia” imagined by some in Moscow, Kharkiv was a key target of President Vladimir Putin’s invasion on February 24, but his army failed to take the city and instead occupied the surrounding villages.

The Ukrainian Defense Forces have now pushed the Russians back towards the border, and there are more cars on the roads and people on the streets. The mayor encouraged businesses to reopen.

But the head of the Ukrainian battalion fighting around the city said on Saturday Russian troops still needed to be evacuated from the Kharkiv region.

“I recommend not to return to Kharkiv yet,” Konstantyn Nemichev of the Kraken Battalion told reporters. “It’s always dangerous.”

The Russian border is only 40 kilometers from the city center and the front line is closer. Twenty minutes north on the highway to the Russian city of Belgorod, the bridge over the Lozovenka River was destroyed.

In the nearby town of Ruska Lozova, few houses have remained intact and dogs own the streets. Vehicles marked with the Z logo of Russia were abandoned in front of houses.

“I was sick, that’s why I couldn’t leave,” said Helena Yehorova as she sat on a bench in the sun outside her front door in Ruska Lozova.

The 80-year-old who has spent her life working on a poultry farm, said her flat was damaged by a rocket but she was saved by the bathroom walls.

“I miraculously survived,” she said.

She moved into a nearby house abandoned by its owners, who were part of her extended family. Russian soldiers told Yehorova they had come to save people, she said.

She said there was little food in the village and she relied on humanitarian donations. The constant shelling was unbearable, she said.

“It’s totally hell,” she told reporters, who were accompanied by Ukrainian soldiers. But she was fatalistic. “I’m not afraid of anyone because I’m going to die soon anyway.”

A Ukrainian village is the victim of another type of Russian war crime: cluster bombs

Despite daily gunfire in and around Kharkiv, the city tried to advance. Mayor Ihor Terekhov stood on the Central Market station platform last week and reopened Kharkiv’s metro system.

For three months, the metro was closed because of the war. Its subway stations have become bomb shelters and camps for those whose homes have been destroyed. But the mayor said it was time to revive the city’s economy.

While waiting for the next train, a commuter said the decision might be premature, but Kharkiv was a big city and needed its public transport system. “It’s also a feeling of peace,” he said. “It’s like the old life is coming back.”

The return of the metro brought residents to a heavily damaged city. Rockets and missiles damaged thousands of buildings and more than 200 schools.

A manager tasked with fixing buildings before winter said he was working on 8,000 repair requests. Many have roofs damaged by shelling, especially in the hard-hit Saltivka district, program director Bogdan Dolyna said.

With the attacks ongoing, two of his staff were injured and one was killed. “Putin should pay for this,” he said of the damage. “They destroyed it and they should pay for it.”

War crimes investigators also assess the damage. They visited a building last week that had been bombed by a Russian plane, which was later shot down.

Twenty-six died in the March 1 attack. One of the two bombs hit outside Olga Dergach’s ground floor apartment as her grandmother sat at the table by the window.

The blast threw shards of glass into the body of her grandmother, who had been in hospital for a month. A nail flew through Dergach’s leg.

The building had nothing to do with the military and many residents were retirees, she said. Witnesses reported seeing the pilot eject.

If he is found, she wants him to be punished properly. When asked what her sentence should be, she replied, “The same thing that happened to us.”

Leading the spring cleaning of Kharkiv, members of the State Emergency Service collected Russian missiles and rockets that landed around the city.

They mainly find Grad, Smerch and Uragan rockets, as well as mines and anti-tank missiles, said Vladimir, a member of the ordinance disposal team.

Ammunition ends up in fields, riverbanks, forests, houses and rooftops. The team takes them to a collection point to destroy them.

Vladimir said he was a father and that seeing rockets in playgrounds upset him. “I’m really angry. I want to kill them with my hands, every one of them,” he said.

Behind a daycare, he met Sergiy Abramov, who guided him to a rocket fragment he found dug into the dirt of his son’s playground.

He showed reporters his building, which had also been bombed. The windows were gone and the exterior was charred black.

His wife Ilona said she had lived in the neighborhood all her life and had seen its decline since the Russian invasion.

The market was destroyed, the buildings were destroyed. It’s like an empty village, she says. More than 200 schools are damaged.

It was too difficult to explain to his son Igor. He was only three years old and couldn’t understand. When he’s older, they’ll tell him, she said.

She didn’t flinch at the sound of another explosion.