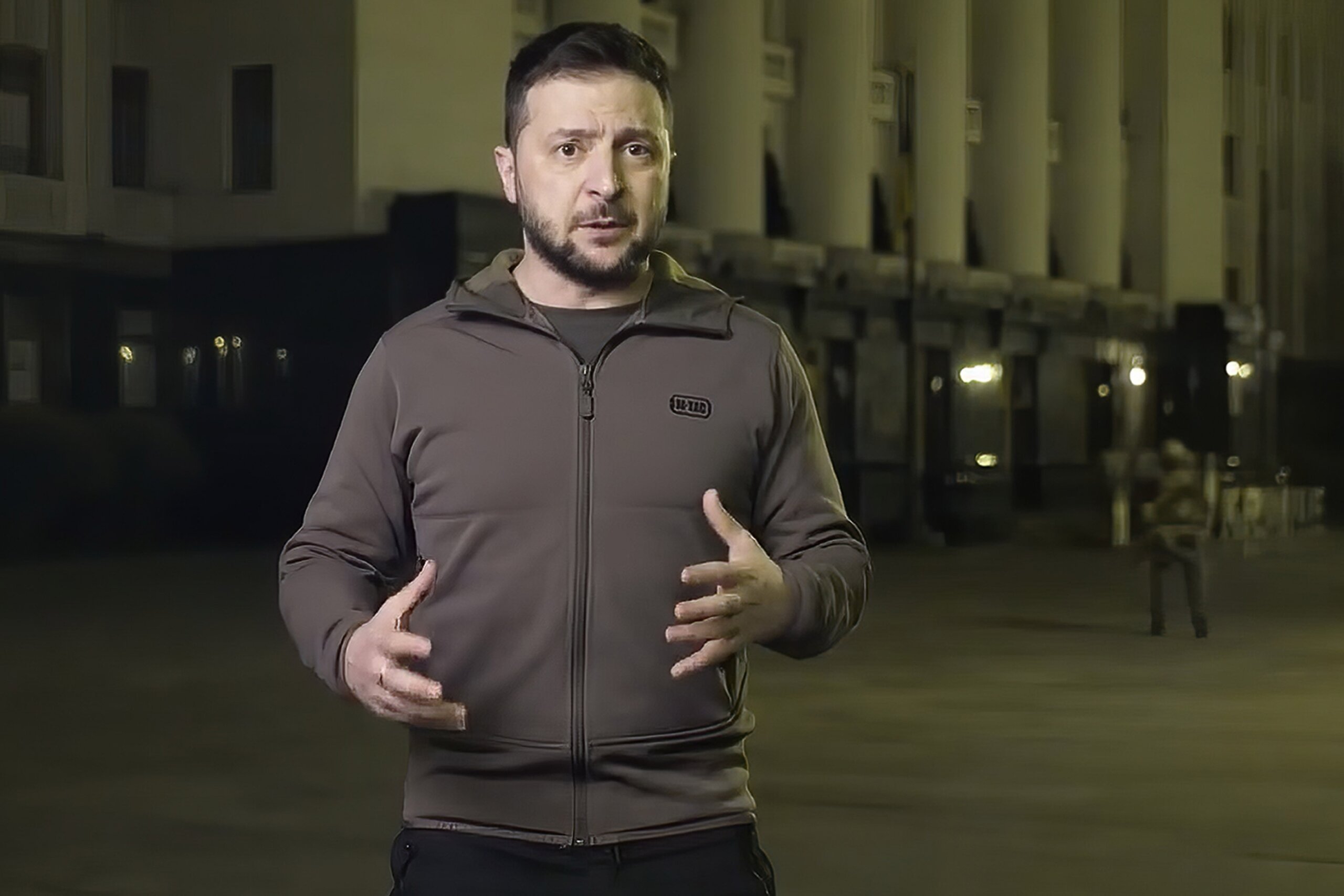 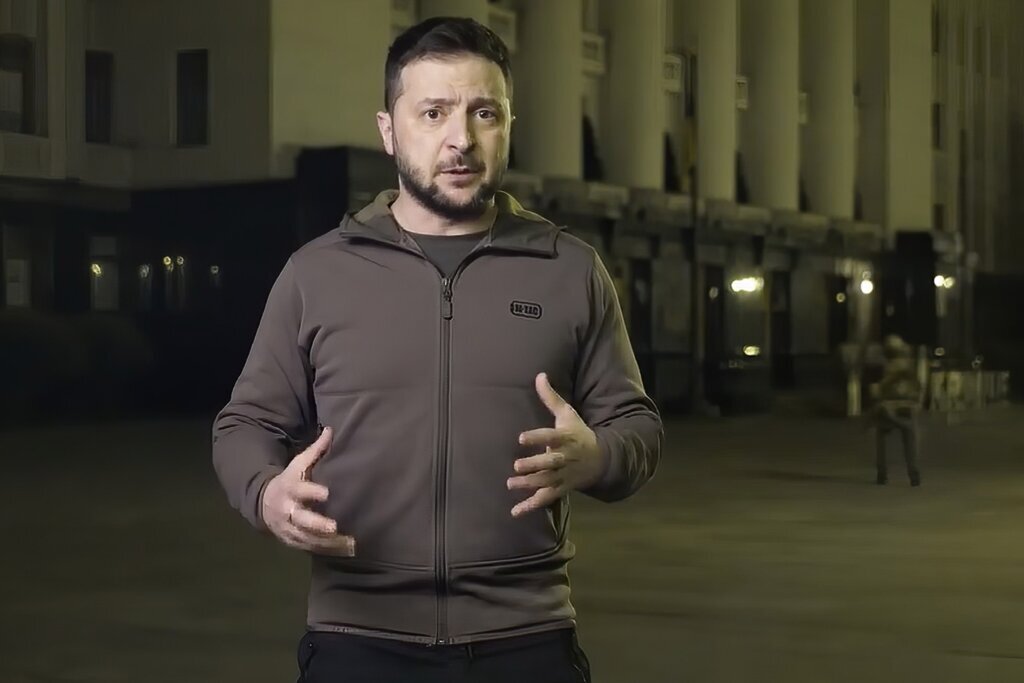 On a day that saw Moscow suffer a stinging symbolic defeat with the loss of its Black Sea fleet flagship, Ukraine’s president hailed his people for their resolve since Russia invaded in February and for making “the most important decision of their life — to fight.”

KYIV, Ukraine (AP) — The bodies of more than 900 civilians have been discovered in the region surrounding the Ukrainian capital following Russia’s withdrawal — most of them fatally shot, police said Friday, an indication that many people were “simply executed.”

The jarring number emerged shortly after Russia’s Defense Ministry promised to step up missile attacks on Kyiv in response to Ukraine’s alleged assaults on Russian territory. That ominous warning followed the stunning loss of Moscow’s flagship in the Black Sea, which a senior US defense official said Friday was indeed hit by at least one Ukrainian missile.

Amid its threats, Moscow continued preparations for a renewed offensive in eastern Ukraine. Fighting also went on in the pummeled southern port city of Mariupol, where locals reported seeing Russian troops digging up bodies. In the northeastern city of Kharkiv, shelling of a residential area killed seven people, including a 7-month-old child, and wounded 34, according to regional Gov. Oleh Sinehubov.

Around Kyiv, Andriy Nebytov, the head of the capital’s regional police force, said bodies were abandoned in the streets or given temporary burials. He cited police data indicating 95% died from gunshot wounds.

“Consequently, we understand that under the (Russian) occupation, people were simply executed in the streets,” Nebytov said.

More bodies are being found every day under rubble and in mass graves, he added, with the largest number found in Bucha, where there were more than 350.

According to Nebytov, utility workers gathered and buried bodies in the Kyiv suburb while it remained under Russian control. Russian troops, he added, were “tracking down” people who expressed strong pro-Ukrainian views.

Ukrainian President Volodymyr Zelenskyy accuses Russian troops occupying parts of the Kherson and Zaporizhzhia regions in the south of terrorizing civilians and hunting for anyone who served in Ukraine’s military or government.

“The occupiers think this will make it easier for them to control this territory. But they are very wrong. They are fooling themselves,” Zelenskyy said. “Russia’s problem is that it is not accepted — and never will be accepted — by the entire Ukrainian people. Russia has lost Ukraine forever.”

In his nightly video address to the nation, Zelenskyy also said he discussed the fate of Mariupol with top military and intelligence officials. He said he couldn’t offer details, “but we are doing everything we can to save our people.”

Zelenskyy said peace and “how many more Ukrainians the occupiers have time to kill” depend on Ukraine receiving more outside support, and echoed calls for more and faster military aid, as well as an oil embargo on Russia.

More violence could be in store for Kyiv after Russian authorities accused Ukraine of wounding seven people and damaging about 100 residential buildings with airstrikes in Bryansk, a region bordering Ukraine. Authorities in another border region of Russia also reported Ukrainian shelling Thursday.

“The number and the scale of missile attacks on objects in Kyiv will be ramped up in response to the Kyiv nationalist regime committing any terrorist attacks or diversions on the Russian territory,” Russian Defense Ministry spokesman Igor Konashenkov said.

Russia used missiles to destroy a facility for the repair and production of missile systems in Kyiv, Konashenkov said.

Ukrainian officials have not confirmed striking targets in Russia, and the reports could not be independently verified.

However, Ukrainian officials said forces did strike a key Russian warship with missiles. A senior US defense official backed up the claim, saying the US now believes the Moskva was hit by at least one Neptune anti-ship missile, and probably two. The official spoke on condition of anonymity to discuss an intelligence assessment.

The Moskva, named for the Russian capital, sank while being towed to port Thursday after taking heavy damage. Though Moscow did not acknowledge any attack, saying only that a fire had caused ammunition on board to detonate, the loss of the ship represents an important victory for Ukraine and a symbolic defeat for Russia.

The sinking reduces Russia’s firepower in the Black Sea, although military analysts disagreed on the event’s significance to the course of the war. Either way, the loss was viewed as emblematic of Moscow’s fortunes in an eight-week invasion widely seen as a historic blunder following the retreat from the Kyiv region and much of northern Ukraine.

“A ‘flagship’ russian warship is a worthy diving site. We have one more diving spot in the Black Sea now. Will definitely visit the wreck after our victory in the war,” Ukrainian Defense Minister Oleksiy Reznikov tweeted Friday.

Russia’s warning of renewed airstrikes did not stop Kyiv residents from taking advantage of a sunny and slightly warmer spring Friday as the weekend approached. More people than usual were out on the streets, walking dogs, riding electric scooters and strolling hand in hand.

In one central park, a small group of people including a woman draped in a Ukrainian flag danced to the music of a portable speaker.

Such attempted signs of prewar life have resurfaced in the capital after Russian troops failed to capture the city and retreated to concentrate on eastern Ukraine, leaving behind evidence of possible war crimes. But a renewed bombardment could mean a return to the steady wail of air raid sirens heard during the early days of the invasion and to fearful nights sheltering in subway stations.

In Mariupol, the city council said Friday that locals reported seeing Russian troops digging up bodies buried in residential courtyards and not allowing new burials “of people killed by them.”

“Why the exhumation is being carried out and where the bodies will be taken is unknown,” the council said on the Telegram messaging app.

Fighting continued in industrial areas and the port, and Russia for the first time used the Tu-22М3 long-range bomber to attack the city, said Oleksandr Motuzyanyk, a spokesman for the Ukrainian Ministry of Defense.

Mariupol has been blockaded by Russian forces since the early days of the invasion, and dwindling numbers of Ukrainian defenders have held out against a siege that has come at a horrific cost to trapped and starving civilians.

The mayor said this week that the city’s death toll could surpass 20,000. Other Ukrainian officials have said they expect to find evidence in Mariupol of atrocities like the ones discovered in Bucha and other towns outside Kyiv.

Mariupol’s capture would allow Russian forces in the south, which came up through the annexed Crimean Peninsula, to fully link up with troops in the Donbas region, Ukraine’s eastern industrial heartland and the target of the looming offensive.

It’s not certain when Russia will launch a full-scale campaign.

Moscow-backed separatists have fought Ukrainian forces in the Donbas since 2014, the same year Russia seized Crimea from Ukraine. Russia has recognized the independence of two rebel-held areas of the region.

Also Friday a Russian rocket hit an airport at night in the central city of Oleksandriia, Mayor Serhiy Kuzmenko said via Facebook. He made no mention of casualties.

And a regional Ukrainian official said seven people were killed and 27 wounded when Russian forces fired on buses carrying civilians in the village of Borovaya, near Kharkiv. The claim could not be independently verified.

Dmytro Chubenko, a spokesman for the regional prosecutor’s office, told the Suspilne news website that authorities had opened criminal proceedings in connection with a suspected “violation of the laws and customs of war, combined with premeditated murder.”

Russia’s Defense Ministry said strikes in the Kharkiv region had “liquidated a squad of mercenaries from a Polish private military company” of up to 30 people and “liberated” an iron and steel factory in Mariupol. The claims could not be independently verified.

Fisch reported from Kramatorsk. Burns reported from Washington. Associated Press journalists around the world contributed to this report.

Follow the AP’s coverage of the war at https://apnews.com/hub/russia-ukraine