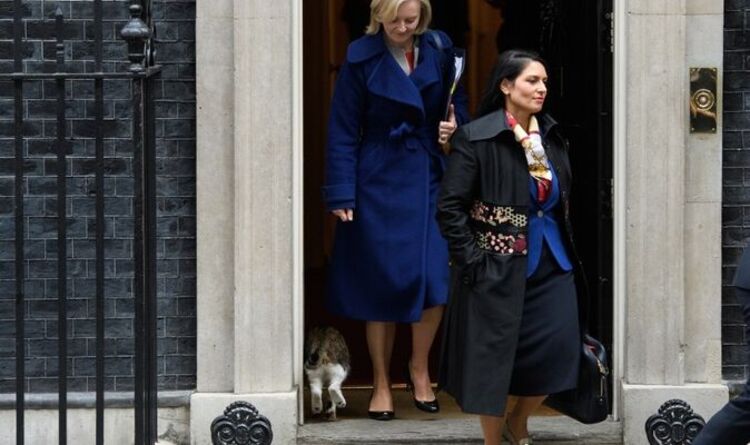 According to the Times, the Foreign Office said it was fully stretched as it has been trying to deal with Russia’s invasion of Ukraine and declined to offer staff to support the Home Office.

However, it has reportedly offered more specialized computer terminals used to process migrants.

Despite the Foreign Office declining Ms Patel’s request, HM Revenues & Customs and the Department for Work & Pensions have responded to the call by providing additional staff.

A Government source said: “Priti thinks the Foreign Office has failed to provide any help.

“But the Foreign Office says it is really stretched at the moment.

“It’s basically saying, ‘Back off, Priti, it’s your problem’.”

The move is thought to help speed up the processing of visas.

Only 500 of the 4,700 people who have been granted visas under the Homes for Ukraine scheme have arrived in the UK, according to figures released last Friday.

The number represents just 1.6 percent of the 32,000 people who have applied to arrive in the UK.

The scheme officially launched on March 18, a time when the Home Office thought it would be able to process around 10,000 visas in just the first week.

READ MORE: Sturgeon could STILL be ‘at mercy of UK Chancellor’ under Scottish independence dream

“The question is how much of that is about Priti and how much is about the Home Office itself.”

However, one Cabinet minister suggested Mr Johnson could be moving closer to sacking his ex-Vote Leave colleague.

They said: “I think even Boris realizes he’s at the end of the road with Priti as Home Secretary.”

“The Home Office has been a mess for decades but at this point you have to accept she isn’t going to be the one to sort it out.”

A Home Office spokesman said: “We have streamlined the process so valid passport holders do not have to attend in-person appointments before arriving in the UK, simplified our forms and boosted caseworker numbers, while ensuring vital security checks are carried out.”