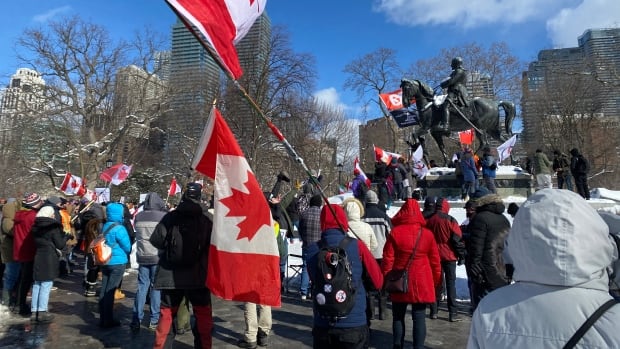 A few hundred protesters marched in Toronto on Saturday to demonstrate against COVID-19 vaccine mandates.

The protesters waved Canadian flags of different sizes and honked horns. Initially, they gathered at Queen’s Park before they headed downtown.

The march comes as police officers in Ottawa continues to force crowds of protesters away from Parliament Hill.

Protesters against COVID-19 health measures are taking to the streets in Toronto.

They walked east across Bloor Street and then turned south on Yonge.#queenspark pic.twitter.com/63OwHkWv3B

Overnight, in anticipation of protests again at the Ontario legislature, Toronto police closed several roads downtown. It is the third weekend in a row that police have created a perimeter around Queen’s Park to stop traffic from reaching the site.

Police said several trucks came into the city on Friday night to cause disruption.

“We made the decision to close further roads to ensure more couldn’t get in,” police said in a tweet on Saturday.

“Thanks to the quick work of officers, the vehicles left. We continue to monitor the situation and will adapt our plans when needed.”

Several trucks came into the city last night to cause disruption. We made the decision to close further roads to ensure more couldn’t get in. Thanks to the quick work of officers, the vehicles left. We continue to monitor the situation and will adapt our plans when needed 1/2
^al

The Toronto closures include the roads around Hospital Row, a stretch of University Avenue, south of College Street, where there is a string of hospitals.

Police said even though the closures are in place in the downtown core, officers are ensuring that pedestrians can access businesses and homes.

All roads are open to pedestrians, police said, adding that they will reopen the road when it is safe for them to do so.

“Ensuring Hospital Row remains clear is our priority,” reads a tweet from the Toronto Police Service.

Police have told anyone who doesn’t need to be in the area to avoid it.

Closures impact the area between Church Street west to Spadina Avenue, and from Davenport Road south to Queen Street West.

“Given the recent events in other cities, the TPS has deployed a greater number of uniformed police officers to the downtown core,” a spokesperson said in an emailed statement.

“We are continuously monitoring security issues not just in Toronto but around the country,” he added.