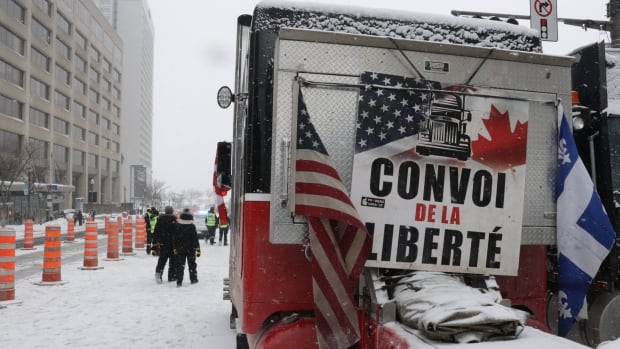 Quebec City police have made three arrests as protesters hold a second demonstration in two weeks near the National Assembly in Quebec City to call for the immediate end of all pandemic measures in the province.

The city’s police force, the SPVQ, announced the arrests via Twitter just before noon Saturday. Police have not released details about the arrests, which they say happened “at the periphery” of the protest.

“The majority of protesters are respecting and honoring their agreement to demonstrate peacefully,” police wrote.

Protesters, including some arriving in convoys from regions such as the Beauce and Saguenay, began gathering in great numbers in front of the National Assembly this morning around 11 am, blaring their horns and carrying signs criticalizing politicians and calling on the government to end pandemic measures .

Despite announcements from the Quebec government that it plans to phase out the vaccination passport and to lift most pandemic measures by mid-March, protesters say the government needs to go further in eliminating restrictions.

“Why are we going to Quebec City? Because they want to suspend the vaccination passport only until the next wave [of COVID-19],” said an organizer, Kevin Grenier, in an interview with The Manic, a local weekly paper in Baie-Comeau.

Beauce resident Jérémie Sarrazin arrived in Quebec City after taking part in the Ottawa protests for the past three weekends. He says he’s here because he’s tired of the continuation of public health measures.

“Kids in school with masks and everything like that, we’re no longer able to stand it,” he said, also calling for the immediate end to vaccination mandates.

“This needs to stop right now. People need to wake up and normal life needs to resume,” Sarrazin said.

Organizers are also calling for the end of the public health emergency, first declared at the outset of the first wave of the pandemic in March 2020.

City trucks are once again being used to block access to certain streets around the National Assembly.

The portion of Honoré-Mercier Boulevard between Grande Allée and René-Lévesque boulevards has been closed to prevent drivers from gaining access to the area in front of the assembly.

Grande Allée is also pedestrian only between de Claire-Fontaine Street and Honoré-Mercier Boulevard.

#MANIFESTATION| In anticipation of the arrival of the demonstrators this evening, here are the streets that will be exclusively pedestrian: Grande-Allée from Concorde to Portes St-Louis AND Honoré-Mercier, between Grande-Allée and René-Lévesque. Plan your trips pic.twitter.com/70K9od7ePX

A parking zone for trucks has been established on René-Lévesque between Honoré-Mercier and Claire-Fontaine, as agreed with organizers, Quebec City police (SPVQ) said in a tweet.

“Any other parking elsewhere will not be tolerated and will result in a police intervention,” police said.

Quebec City Mayor Bruno Marchand says the SPVQ has “prepared for all possibilities” and he’s confident the demonstration will go smoothly.

“We are preparing for the worst, but we hope for the best,” Marchand told Radio-Canada Saturday morning.

“We have all the tools to make sure that it will be a proper and compliant demonstration.”

In the lead up to this weekend’s protest, Marchand moved to grant police more powers to “act instead of reacting.”

The city’s executive committee passed two new municipal regulations: one which gives police the power to control traffic, parking and street closures in the city and the other which reinstates a ban on outdoor cooking and consuming alcohol in parks and in public spaces.

“As we do with every protest, we will have a certain level of tolerance, as long as the orderly conduct of the protest is not compromised,” said André Turcotte, assistant director with the SPVQ.

Numerous officers in yellow vests are patrolling the area around the National Assembly.

During the weekend of protests two weeks ago, the SPVQ also made three arrests and towed one vehicle. They also handed out 48 parking tickets, 50 tickets for municipal bylaw infractions and 72 for violations of road safety laws.

Quebec City police say they will respect the right of demonstrators to protest public health measures, but say “no vandalism or criminal infractions will be tolerated.”

The protest comes after police in Ottawa moved in yesterday to arrest protesters who have been taking part in a three-week long occupation of the downtown core.