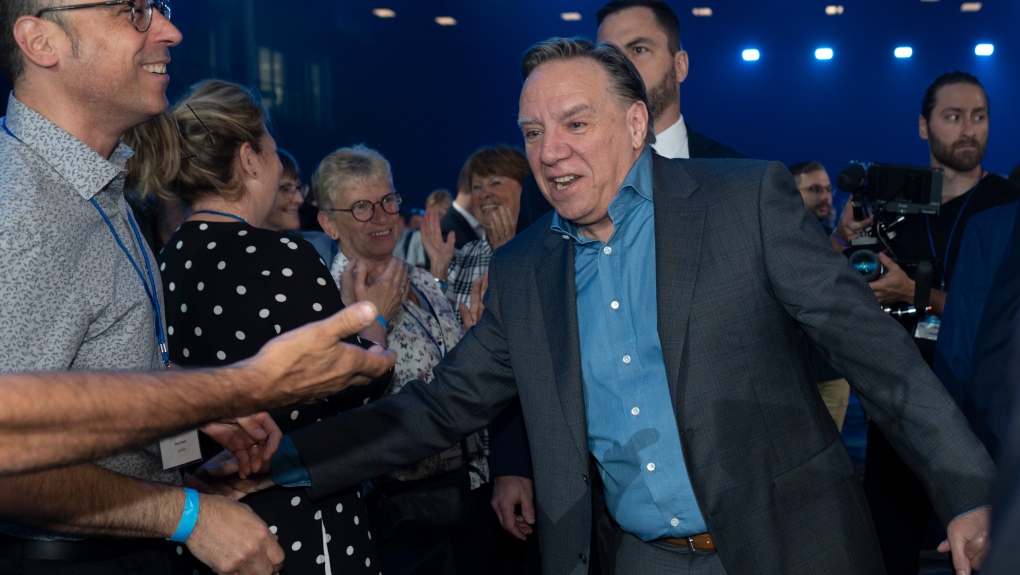 A new confrontation is emerging between Ottawa and Quebec on the issue of immigration control.

Premier François Legault wants all powers over immigration, traditionally shared between the two levels of government, to be repatriated to Quebec.

He says it’s a question of survival for the Quebec nation, not hesitating to raise the specter of Louisiana and the gradual disappearance of the French language in Quebec if the status quo is maintained.

He said Sunday that he intended to demand a “strong mandate” from the population during the vote on October 3 to give himself a real “balance of power” with Ottawa when it comes to negotiating a possible repatriation of all powers. in terms of immigration to Quebec, with the exception of refugees.

Legault chose to close his CAQ (Coalition Avenir Québec) party convention on Sunday with a speech with a strong nationalist content delivered to more than a thousand activists gathered in Drummondville all weekend around the theme of Quebec pride.

Total control of immigration by the National Assembly is linked to the “very existence” of the Quebec people, he argued, recalling that the federal government has decision-making power for about half of newcomers, including those who arrive through the family reunification channel. It is estimated that half of them do not speak French, a threat to Quebec, he said.

The request for patriation of powers in this area is not a new request from Quebec, which has always come up against a wall in the past.

However, Legault has made it a priority and says he is confident he will succeed where others have failed before him. Quebecers can expect to hear a lot about immigration in the upcoming election campaign, with pressure on Prime Minister Justin Trudeau and opposition party leaders in the House of Commons to get involved.

“I’m confident we’ll get those immigration powers,” he told a news conference afterwards, although he was coy about what would happen if he received another categorical refusal from the federal government.

He rejected the idea of ​​a referendum on the subject.

“It is important that Quebecers understand that this is a question of survival for French Quebec,” said Legault, who may have to use his teaching skills over the next few months to convince the population to support his views. On the question.

If nothing changes, he said, “it could become a matter of time before we become a Louisiana.”

Regarding the October 3 general election, the head of the CAQ said that the population should be wary of “ideologies” both left and right, alluding, without naming them, to Quebec solidaire (QS) and the Conservative Party of Quebec. (PCQ).

In his speech, the Prime Minister gave a very flattering assessment of the achievements of his government, concluding that after four years of governance of the CAQ, Quebec was more prosperous and proud than ever.

“We changed Quebec,” he said, and apparently for the better.

On the economic front, he said voters should trust experienced people to deal with the “unstable” climate looming on the horizon in the next term.

He pledged to help people fight inflation and promised to make a concrete announcement to that effect, in hard cash, during the next election campaign.

But he did not say a word about the most serious and urgent economic problem of the moment, the labor shortage.

Nor does it list the many problems of access to health care, with ever-growing waiting lists, whether in the emergency room, for surgery or on the patient list. a family doctor.

But he says he has “the asset” to solve the problems of the network in a second term, in the person of Christian Dubé, his Minister of Health, who recently announced his intention to represent himself. Dubé received a standing ovation from CAQ party members.

Meanwhile, four months before the elections, the process of recruiting CAQ candidates for the next elections is going well. There are already nearly a hundred ridings that know the name of their CAQ candidate, half of which are currently women. There are still 29 candidates out of 125 to be identified.


— This report from The Canadian Press was first published in French on May 29, 2022.