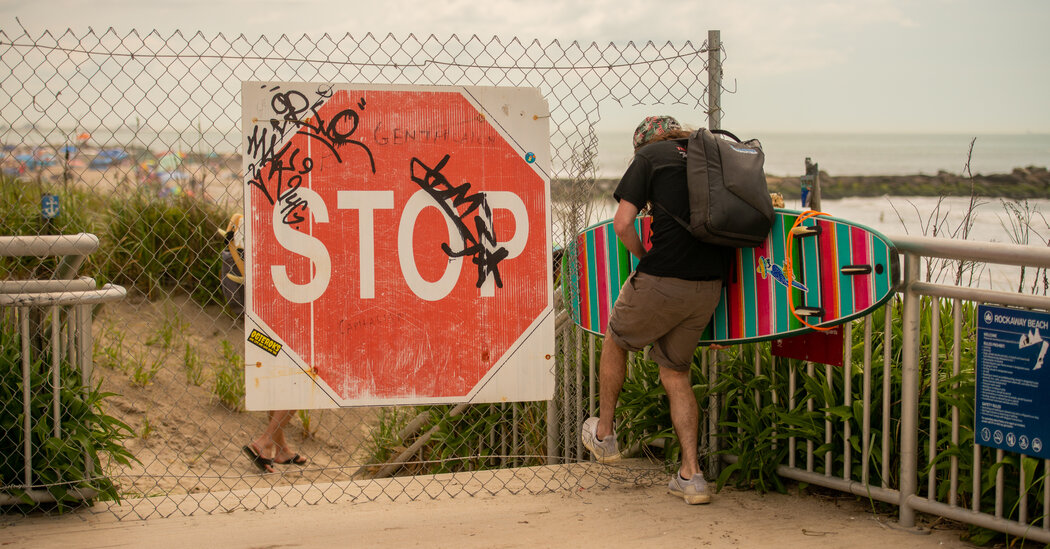 When Barbara Lyn and a friend arrived in Rockaway Beach on Sunday morning, they found the perfect spot on the sand near Beach 96th Street.

But as Ms. Lyn waded through the surf, a city parks worker whistled and yanked her out of the water.

Ms Lyn, 44, was not surprised. “To be honest, we wanted a good spot,” she said, admitting she knew the area was technically closed to the public for swimming. “This is our rebellion.”

The two friends were among those undeterred by construction-related closures along Rockaway Beach, Queens, who still flocked to one of the city’s most popular summer destinations to sunbathe and dinner during the holiday weekend.

Swimming and sand access is restricted along a popular stretch of the beach – running west from Beach 86th Street – until at least mid-July as the federal government pushes ahead with a plan to $336 million to protect the coastline from coastal flooding. Some areas are fully enclosed, while others are open except for swimming.

The project, which began in 2020 and is expected to be completed in 2026, requires federal contractors to install pier-like stone structures that will prevent sand from washing away. On Sunday, two giant earth-moving machines were herded behind a dune fence in an area dotted with “Keep Off” and “No Lifeguard” signs.

At Beach 91st Street, surfers in dark wetsuits ignored restrictions as they squeezed through a gaping hole in a chain-link fence attached to a large red stop sign.

“Nobody’s gonna stop anything,” Aaron O’Toole said after he finished surfing Sunday morning. Holding his surfboard with one hand while removing his wetsuit boots with the other, Mr O’Toole, 27, said surfers in Rockaway had been navigating closures and other restrictions for years.

Molly and Nick Stamos, in town from Michigan for the long weekend to visit their daughter, had no idea of ​​the limited beach access.

“Aren’t we supposed to be here?” said Ms. Stamos, who was sitting with her back to a wall of bulldozed sand.

Ms Stamos said the family saw no ‘Do Not Enter’ signs as they walked from the boardwalk to the beach. They settled along a cove-like stretch of sand with few bathers, no lifeguards, and an ocean view dotted with surfers who were technically limited to waters farther east.

Informed of the restrictions, the family decided to stay put.

Law enforcement up and down Rockaway Beach appeared light on Sunday, with only an occasional park worker or policeman on a big-wheeled ATV to get people out of the water. Most visitors seemed oblivious to the restrictions.

Small business owners in Rockaway Beach had worried about the economic impacts of beach closures.

Susan Povich, owner of Red Hook Lobster Pound, a restaurant that serves lobster rolls and seafood, estimated that her restaurant’s revenue would drop by about 50% from reduced foot traffic due to the restrictions.

‘A lot of businesses were closed during Covid,’ she said, ‘so this was the year we expected to catch up with all the sweat and bloody tears of the past few years, and now we don’t we’re not sure we’ll get a lot of feedback.

Ms Povich was one of many small business owners to start a Change.org petition earlier this month to oppose the closures. The petition, which has received more than 5,900 signatures, implores the city to halt construction on the erosion project until September, warning that the closures could be “the straw that will break the camel’s back.”

Aaron Broudo and Belvy Klein, owners of Rockaway Beach Bazaar, a dealership along the boardwalk, said they welcome the restoration project, but the timing of construction was a bit “tone deaf”.

“We and all the small businesses on the peninsula are absolutely dependent on the brief three-month summer season to get through the rest of the year,” the owners wrote in an email. “While we disagree that summer is the best time to restore the beach, and that it would have been nice to see the piers completed before the start of the high season, we understand that work is needed.”

Dan Kastanis, spokesman for the New York City Department of Parks, said the city has worked to minimize economic impacts on business owners and to keep as much of the beach open as possible.

The Rockaways were battered by Hurricane Sandy in 2012, when a 10-foot storm surge destroyed 1,000 structures and homes, damaged the boardwalk, and caused widespread flooding. Following this storm, municipal, state and federal authorities called for a more comprehensive plan to protect the coastline from the ravages of future storms.

The Army Corps of Engineers, which launched the Rockaway Resilience Project in 2020, is installing stone structures called groynes — similar to rock jetties — in the ocean to fortify the sand along the beach. The next phase of the project will be to install dunes, reinforced with stone and steel, to provide protection against breaking waves and to stop coastal flooding.

“When you’re a riverside community, your community is on the front lines of climate change,” he said, adding, “We want people to live through storms. And if that means you miss half the summer to jump in the water, walk a few blocks and use other parts of the beach.