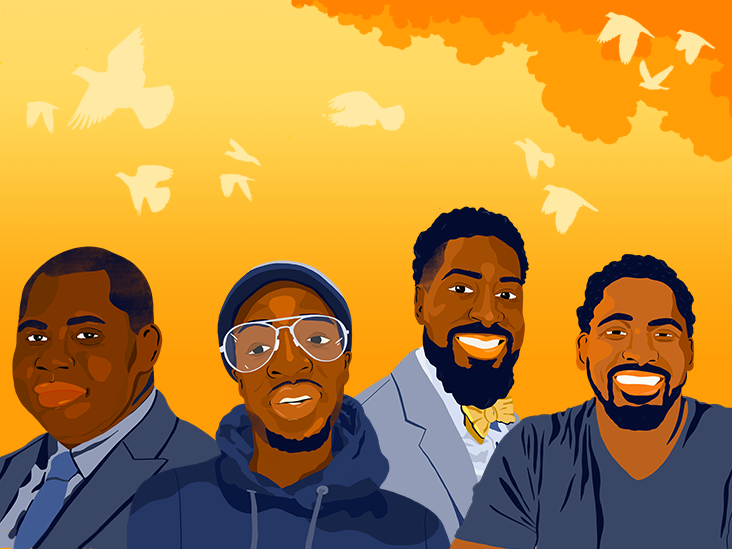 Four black fathers discuss what fatherhood means to them and the legacy they leave for their children.

Since 1965, the black family has been viewed negatively — as a single-parent family headed by a black mother who has had children out of wedlock.

This stereotypical projection was first introduced by Daniel Patrick Moynihan in his report, The Negro Family: The Case for National Action.

The Black family: the case of complete statistics

Moynihan detailed the prejudices suffered by black Americans until the 1960s and a growing gap between black families and other groups. But blacks are not the only community to have seen a decrease in the number of nuclear family structures.

The Census Bureau found in its 2021 Current Population Survey that since 1968, the number of children living with two parents has dropped across all races.

What these numbers don’t take into account is that even in families where the child lives only with their mother, that doesn’t mean those children don’t have a father or father figure in their lives.

As Omarr K. Rambert noted in his 2021 UCLA law journal article The Absent Black Father: Race, The Welfare-Child Support System and the Cyclical Nature of Fatherlessness, “modern conceptions of [fatherhood] focus on the actual social relationship between a man and a child.

Reveal White, a home improvement contractor living in Atlanta, is a father of three sons.

Growing up, he remembered that it was just him and his mother, but his mother had a long relationship. His uncles and grandfathers were also present. All the men present in his life have modeled virility and fatherhood.

White remembers his uncle being a bit of a Renaissance man. “He was a soldier, and he was also an excellent cook. … He was always surrounded by more affluent people. So it was he who taught me how to put on a tuxedo.

He learned the importance of keeping a house from his grandfather, whom he called “a man of men”.

White identified what he did and didn’t want to pass on to his children from every man in his life.

“You know, I didn’t have the patience. I didn’t understand much. I was unlucky, in my opinion, to be a child,” he says.

Ron Jones, a divorced father of two, acknowledges that his personality doesn’t lend itself to close relationships with people, but that doesn’t mean he hasn’t learned from the people in his life.

He adds: “…when I became a father, I was able to appreciate him more than I did growing up, and so it was more of a relationship of observation than talking about the norms of how to be a man and how to be a father.

Andy Cezar, who is Haitian-American and married with three children, has a close relationship with his father, but says that wasn’t always the case.

“Me and my dad, we had ups and downs, just kind of a growing pain of being a son,” Cezar says.

But even through those ups and downs, Cezar noted that his father encouraged him and pushed him in the right direction. He attributes this grace to their close relationship today.

“I call him, or he calls me once every two days. I mean, we’re a close-knit family.

Rodolfo Perez also comes from a close-knit extended family. As a boy growing up in Panama, he was surrounded by his father, grandfather, and great-grandfather. From them he took wisdom.

He says, “Each generation has its own thing. You know, my great-grandfather’s generation was different from my grandfather’s. My grandfathers from my father, and you know, you take the good, the bad, and the ugly, and you learn from it.

Perez thinks his fatherhood journey is very different from his ancestry because his children are growing up in America. Thus, he prioritizes passing on the cultural significance he grew up with to his children.

White, Jones, Perez and Cezar approached their journey of fatherhood by first observing and learning from their ancestors. They all said then that they found ways to pass on the good they had been given and corrected what they didn’t like in their own childhood experiences.

White, whose sons are 25, 19 and 8, has made sure he’s interested in their interests: whether it’s lacrosse, skateboarding or an obsession with dinosaurs.

“I didn’t learn skateboarding per se, but I started researching stuff and things like that. I started buying him the clothes, and then I got him sponsored by Vans.

Making Room For Kids To Be Kids, A Touch Of Street Smarts And A Masterclass In Love

White says some parents and fathers take a wrong turn by not spoiling their children as children. He said, “Childhood…is certainly a short period of life, but it’s actually the most important.”

While indulging in their youth, White says he also makes sure his sons are prepared for any situation.

Jones, Perez and Cezar still have young children. They say that fatherhood is for them a source of happiness and joy.

They each strive to impart the best of themselves into their children’s lives so that children can take those lessons with them as they grow.

For Jones, her main lesson to her 9-year-old daughter and 6-year-old son is love.

“I want my daughter to know what it’s like for a man to love her. So that when a man her age picks on her, she knows what love is, and it’s not not just a random guy who is cute and has sweet words… Conversely, with my son… He will watch me do that, and he will see how to like someone because I will love him and her.

Character – in addition to cultural and spiritual tradition – is one of the key aspects that Perez wants to pass on to his children.

“When we leave this Earth, why will people remember us? he asks before answering his own question. “I think if I want them to take anything, it’s always to have a good character on this Earth and to make this Earth a better place.”

By giving their children their very best, the four men also realize what stands against them as black fathers.

They are keenly aware of the stigmas and stereotypes of “Black fatherless homes” that threaten to define what it means to be a Black American father – whether true or not.

Jones, who is divorced, said he and his ex-wife decided that even though their children technically came from a ‘broken home’, they were both trying to make sure they didn’t cause them harm. undue with parental drama.

But even with healthy co-parenting, he’s not naive about what’s being said about absent black fathers. To this specific stigma and stereotype, he says bluntly, “I don’t care what people think about black dads.

He explains: “With black people, we are held responsible for our whole race. It’s wrong, it’s not fair, but it is. So my answer to that is exactly like what white people say, ‘It’s not all of us.’

For Jones, the only opinions that matter to him are those of his son and daughter.

To any detractor who sees him as an absent father who is only with his children “half the time”, he replies: “For the time I am with them. I’m going to be the best dad I can be.

This two-household construction and pattern of fatherhood is often what is overlooked when statisticians and sociologists associate fatherlessness in one house to a child:

Although there is a strong correlation between absent fathers and the aforementioned social outcomes, these social ills do not only affect black families and are not entirely to blame on black fathers.

White, who is now engaged, has been co-parenting with the mothers of his sons from his own home.

He says it’s important for black people to realize that even if your father been absent, someone stepped in to fill the role and provide some semblance of structure.

“It could have been your uncle, and it turned out to be your [surrogate] dad who took and assumed this role.

White said more black men need to stand up to fight the stigma of being absent and lead by example when it comes to fatherhood or mentorship.

Cezar and Perez, who are both married, want to leave their children an ancestral heritage.

Cezar says, “I am part of that heritage…our ancestors being from Africa, then descending from Haiti, and now here in this country, I see being a black father as another link in the quality chain of our family is populating the Earth.

For Perez, legacy means making sure his children understand the ancient customs, traditions and spiritual practices of his native Panama, and even further, the African ancestry that runs through their line.

As a practitioner of Ifá (Yoruba African religion), Perez said his spiritual practice and discipline made his life easier as a father.

“You don’t have to be religious, but it’s either God on the inside or God on the outside,” Perez says, echoing his grandfather’s wisdom. “You can tell what man moves with God without because his decisions are so destructive. This man who works with God within works in harmony.

White sees his sons as an extension of himself.

“That they’re also the only ones who can stand up and 100% stand up for my name, stand up for what I stand for, and actually propagate what I stood for in my death,” he says.

White, Jones, Perez and Cezar all take a long view of how they fight the stigma of black fathers by building a legacy. Jones views his role as a father to his children and as a citizen of the world through the lens of love.

“I’m going to serve these two kids in a way they know they love,” he said.

Nikesha Elise Williams is a two-time Emmy award-winning producer, award-winning author, and the producer and host of the Black & Published podcast. His latest novel, “Beyond Bourbon Street”, was awarded Best Fiction by the Black Caucus of African-American Librarians as part of the 2021 Self-Published eBook Literary Awards. He also received the 2020 Outstanding Book Award from the National Association of Black Journalists (NABJ). Nikesha’s debut novel, “Four Women,” received the NABJ 2018 Outstanding Literary Work Award and the Florida Authors and Publisher’s Association President’s Award for Adult Contemporary/Literary Fiction. Nikesha is originally from Chicago. She attended Florida State University and earned a BS in Communications: Mass Media Studies and Honors in Creative Writing in English. Nikesha writes full time and has bylines in The Washington Post, ESSENCE and VOX. Nikesha lives in Jacksonville, Florida with her family.