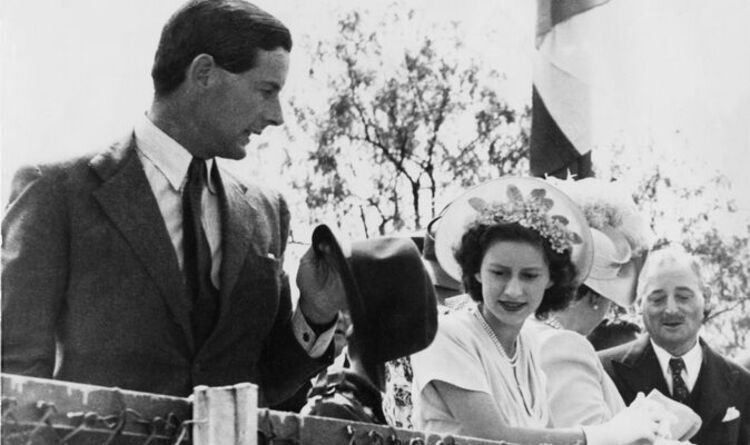 Princess Margaret was the younger daughter of King George VI and Queen Elizabeth and the only sibling of Queen Elizabeth II. The romance between Princess Margaret and Group Captain Peter Townsend is often referred to as a “doomed love affair” and Mr Townsend’s memoir details the course of the couple’s relationship right up to the “unendurable situation” that led them to part ways.

The pair’s relationship ended in 1955, and almost 30 years later the Battle of Britain hero eventually wrote a book telling his side of the story.

Peter Townsend went into details about the affair, giving the public an in-depth look into the relationship that rocked the Royal Family and the British Establishment, and the book is now being republished.

Within the memoir, Mr Townsend explains how he first met Princess Margaret on February 16, 1944, after being told by the RAF’s Chief of Staff he was being redeployed, as an equerry to the King.

He says he was “amazed”, as he had “no connection with the Royal Family.”

He wrote: “I was amazed. I was born in Burma, where my father was a Commissioner, and educated at Haileybury, before joining the RAF. I had no connection with the Royal Family.

“George VI had apparently decided he wanted staff chosen for their fighting record rather than family or regimental connections.

“After my introduction, down the corridor came two adorable-looking girls; Princess Elizabeth, then 17, and her sister Margaret, 14.

“Princess Elizabeth — our future Queen — was the King’s pride. Princess Margaret was his joy.”

Mr Townsend explains that what made Princess Margaret so attractive to him was “that behind the dazzling facade, you could find, if you looked for it, a rare softness and sincerity”.

Seven years after their first meeting, Mr Townsend explains that Margaret’s enjoyment of life gave him joy and that his “unhappy, ten-year marriage was drawing to an end”.

Within its pages, Mr Townsend explains “Princess Margaret and I found solace in one another’s company” following the death of King George VI. He writes of the early stages of their relationship: “Princess Margaret confided in her sister.

“A few days later, Her Majesty invited us to spend the evening with her and Prince Philip. This stands out in my memory: the Queen’s sympathetic acceptance of the disturbing fact of her sister’s love for me.”

He added: “The family greeted the news with charity: the same cannot be said of the Establishment.”He explains how the couple’s “unmitigated joy turned — for both of us — into a trial by ordeal” as the pair faced higher powers including Tommy Lascelles, the Queen’s private secretary.

He said: “The crucial problem was that I was divorced. The Queen, as titular head of the Church of England, could not, constitutionally, give her consent, unless her prime minister saw fit to advise her otherwise.”

He explains that Winston Churchill “felt it would be disastrous for the Queen to consent to the marriage of her sister with a divorced man”, and that Margaret would have to wait until she was 25 to marry without Her Majesty’s consent.

Instead, the world found out about their love affair via the press and Mr Townsend was appointed air attache to the British Embassy in Brussels. While in Brussels they wrote to one another every day, and spent a year apart and reconciled when Margaret was 24.

Later, he explains that as it neared her 25th birthday Princess Margaret “now had confirmation, for the first time, of the consequences of a marriage with me” from the then Prime Minister Antony Eden.

He wrote: “If only she had known before, the approaching drama might have been avoided. But now it was too late.”

Later he details these consequences, writing: “She would be stripped of her royal rights and prerogatives, which included accession to the throne and a £15,000 government stipend due on marriage — conditions which, frankly, would have ruined her.

“There would be nothing left — except me.” He added: “The painful facts of the situation were only too clear: the country, the Commonwealth, the entire world, was in an uproar over us.”

Mr Townsend explains that both he and Margaret were experiencing an “unendurable situation”.

He explains that Margaret had been made aware of the full details of their upcoming situation if they were to wed, and the repercussions they would face if they went through with the wedding.

He wrote: “In just over a week the smile had vanished, her happiness had evaporated. It was time to put an end to an unendurable situation.”

He and Margaret then came to the decision that they would not wed and that a statement would be issued publicly noting such a fact.

Ahead of it being issued, he wrote of their relationship, “We did not feel unhappy. Without dishonour, we had played out our destiny. There remained only the glow of tenderness, constancy and singleness of heart. “Then we, who had been so close, parted.”

Four years later, in December 1959, Mr Townsend married Marie-Luce Jamagne, with whom he had three children.