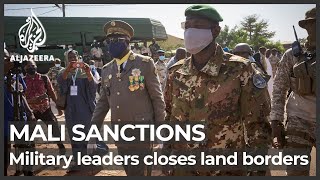 Russia and China have blocked the UN Security Council from backing a decision by the West African economic bloc of ECOWAS to impose new sanctions on Mali, after its military leaders offered to stay in power until five years before holding elections.

A council statement drafted by France endorsing the sanctions was not approved in closed-door consultations on Tuesday, prompting three African council members – Kenya, Ghana and Gabon – to speak to reporters in support the position of the regional bloc.

Kenyan Ambassador to the UN Martin Kimani said he was “disappointed” that the council could not agree on what he called a “relatively soft” press release and expressed support for “the imposition of sanctions against the military authorities of Mali to ensure an accelerated transition to constitutional rule”.

Economic Community of West African States leaders on Sunday suspended most trade and financial aid to Mali, closed land and air borders “with affected states” and activated the bloc’s standby force. , asserting that she “will have to be ready for any eventuality.”

The move came after Mali’s caretaker government last month offered to stay in power for up to five years before holding an election, despite international demands to keep its promise to hold an election on February 27 this year. .

France, the former colonial power of Mali which also holds the rotating presidency of the European Union, and the United States, have stressed their support for the ECOWAS sanctions.

“We are totally in solidarity with the region and this very courageous and clear position” of ECOWAS, French President Emmanuel Macron told reporters on Tuesday.

Washington has also supported the “strong actions” of the 15-member bloc and urged the Malian regime to honor its promise to return to democracy.

“A five-year transition is not in their best interests and prolongs the pain of the people,” US Ambassador Linda Thomas-Greenfield said at a Security Council meeting.

The Algerian presidency, which shares a long border with Mali, also called on the military to negotiate with ECOWAS and to “arrive at a plan to end the crisis, taking into account international demands and the legitimate demands of the Malian people”.

Support for the military government of Mali

Chinese Ambassador Dai Bing noted that Mali is in the midst of a critical period of transition and said outside forces should refrain from exerting undue pressure on the West African country.

Noting the recent actions of ECOWAS, as well as the response of the transitional authorities, he encouraged the two parties to strengthen dialogue and resolve regional issues.

Russia rejected the council’s proposed declaration as unbalanced and expressed sympathy to the government.

“We understand and are aware of the difficulties encountered by the Malian authorities in the preparation of the legislative elections,” said Russian Ambassador Vassily Nebenzia.

“We agree that without restoration of government control in many parts of the country, it will be difficult to see the vote as legitimate.”

French Ambassador Nicolas de Rivière reiterated his country’s condemnation of the deployment of mercenaries from the Russian Wagner group, which he said “are known to threaten civilians, plunder resources, violate international law and state sovereignty. “.

He regretted that Mali’s transitional authorities “are using already limited public funds to pay foreign mercenaries instead of supporting national forces and public services for the benefit of the Malian people”.

Russian Foreign Minister Sergey Lavrov denied that the Russian government was involved and said the company had a “legitimate” right to be in the West African nation because it had been invited by the transitional government.

Mali’s ambassador to the UN, Issa Konfourou, told the Security Council that there were no mercenaries on Malian soil. He said Russian trainers are in Mali to advise and train its military on the use of military equipment acquired by the Russian government.

Konfourou said his government was “shocked” by the economic and financial sanctions by ECOWAS and “categorically condemned these illegal and illegitimate measures”.

In a speech to the nation on Monday, the military leader, Colonel Assimi Goita, called the sanctions “inhuman” while declaring that Mali remains open to dialogue.

Threatened with sanctions following the coup, he had promised to organize presidential and legislative elections and to restore civilian rule by February 2022.

But he staged a second de facto coup in May 2021, forcing an interim civilian government and disrupting the timetable for restoring democracy.

Goita declared himself interim president, and in December his government offered to stay in power for up to five more years.