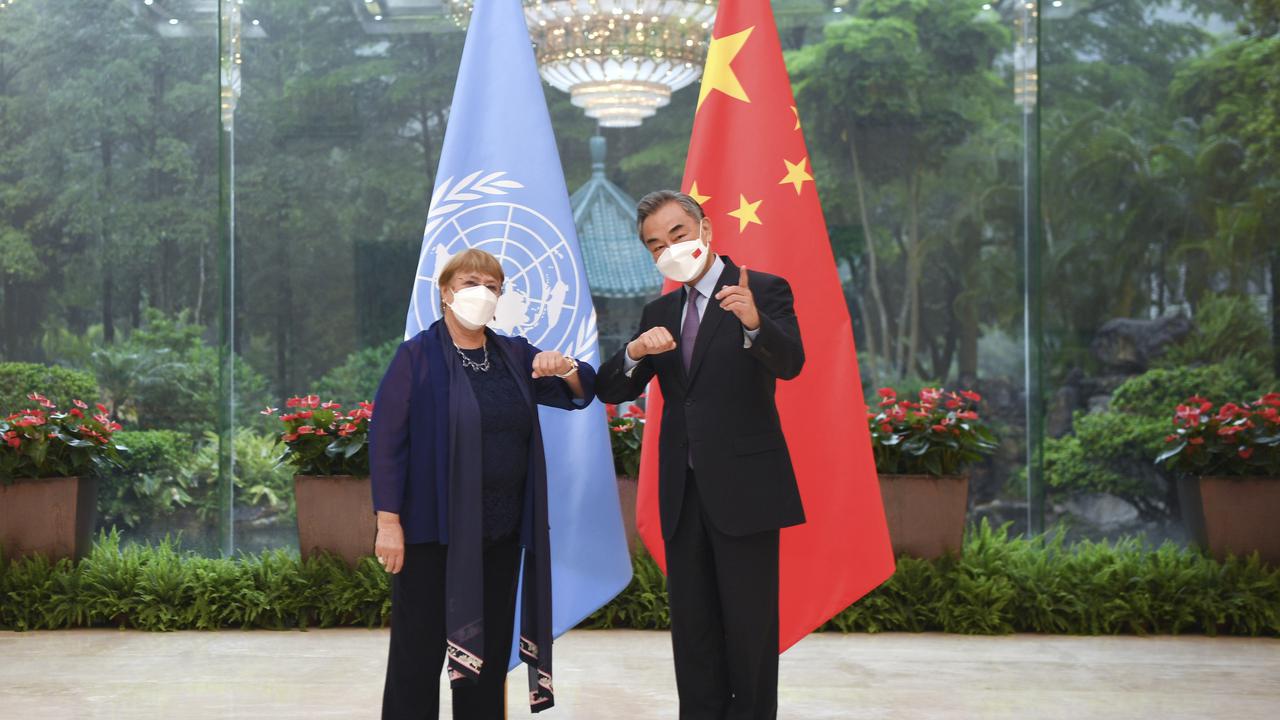 China says the US, UK and other foreign powers are seeking to sabotage its foreign relations by orchestrating criticism surrounding a trip by the top UN human rights official.

China has long withheld the fact-finding mission led by Michelle Bachelet, which focused on allegations of mass confinement, forced labor and compulsory birth control measures imposed on members of the Uyghur, Kazakh and other Muslim minorities.

Chinese Foreign Ministry spokesman Wang Wenbin went on the offensive in the face of such criticism on Tuesday, saying that “the United States, Britain and other Western countries have repeatedly held political pranks surrounding the visit of the United Nations High Commissioner for Human Rights to China”.

“They first openly and strongly demanded that the high commissioner visit China and Xinjiang, and carried out the so-called investigation with presumption of guilt,” Wang said at a daily press briefing.

The US, UK and other countries “rushed in and spared no effort to disrupt and sabotage the visit, creating conditions and obstacles for the visit”, Wang said.

Chinese Foreign Minister Wang Yi met with Bachelet in the southern city of Guangzhou on Monday, telling him that China opposes the “politicization” of human rights and the imposition of double standards.

Bachelet’s trip is the first to China by a United Nations high commissioner for human rights since 2005.

His six-day visit focuses on allegations of abuse against Muslim minorities in the northwest region of Xinjiang, but rights groups fear it could help whitewash a crackdown that the US has labeled genocide. .

China has locked down an estimated one million or more minorities in what critics describe as a campaign to erase their distinct cultural identities.

China says it has nothing to hide and invites anyone with no political bias to visit Xinjiang and see what it describes as a successful campaign to fight terrorism and restore order and ethnic cohesion.

From Guangzhou, Bachelet must travel to Kashgar, once a stop on the Silk Road, and Urumqi, the capital of Xinjiang.

The UN and China have banned foreign media from accompanying Bachelet and it is unclear who she will meet and what access she will be granted throughout her visit.

The UN quoted Bachelet telling Wang that she looked forward to interacting with “many different people during my visit, especially with government officials, business leaders, academics, students and members of civil society working on human rights and other social and economic issues”. ”.

“As we discuss sensitive and important issues, I hope this will help us build trust and enable us to work together to advance human rights in China and around the world,” he said. cited.

“Wang noted that to advance the international cause of human rights, we must first respect each other and refrain from politicizing human rights,” the Foreign Ministry said in a statement posted on its website.

“Multilateral human rights institutions should serve as a major venue for cooperation and dialogue rather than a new battleground for division and confrontation,” he said.

China’s ruling Communist Party does not allow any political opposition and strictly limits freedom of speech and the rights to assembly and religious expression.

China is also one of five permanent members of the UN Security Council with veto power and has signed but not ratified the International Covenant on Civil and Political Rights administered by Bachelet’s office.

In an online meeting Tuesday with Wang, German Foreign Minister Annalena Baerbock cited the “shocking reports and new evidence of very serious human rights abuses in Xinjiang and called for a transparent investigation,” said his ministry.

“Human rights are a fundamental part of the international order and Germany is committed to protecting them worldwide,” Baerbock said.

“I think it’s important that these accusations, which have been known for a long time, be addressed by the Chinese side, and I said that very, very clearly during the discussion this morning,” she added. .