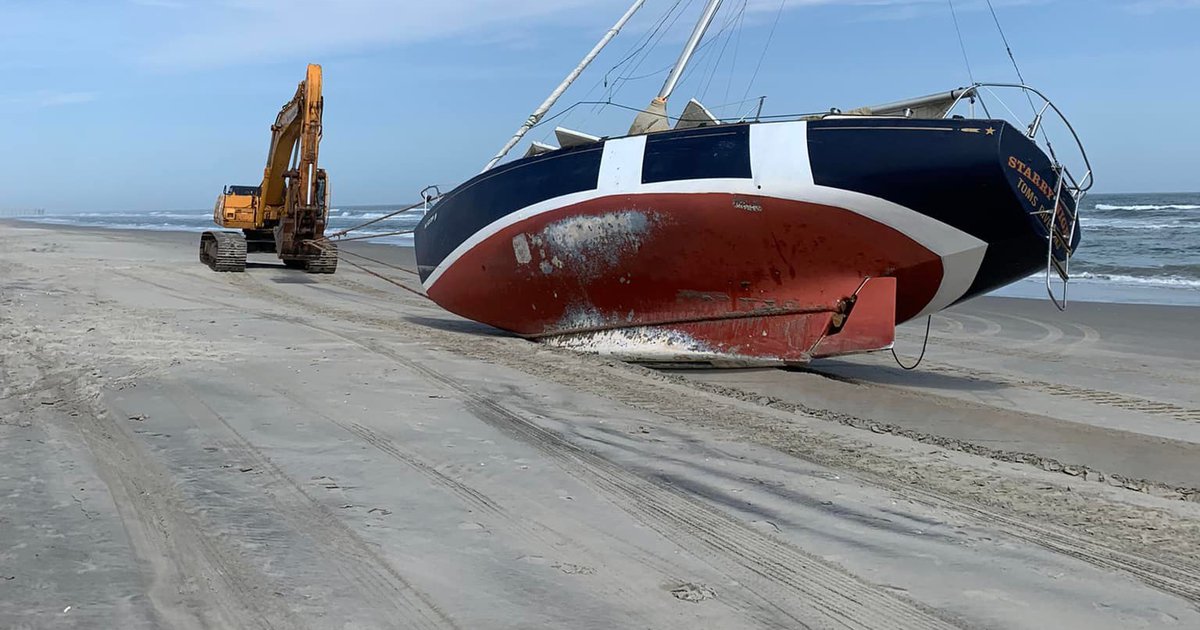 A man who fell asleep on his 35-foot sailboat is lucky to have walked away unscathed after the vessel’s anchor came free and the boat ran aground in Avalon on Thursday morning.

The incident happened on the 47th Street beach, where onlookers spotted the Pearson 35 sailboat along the shore around 10:00.

According to the Cape May County Herald, the unidentified owner of the boat had anchored the vessel and had fallen asleep, but didn’t notice when the vessel began to drift.

Sea Tow Cape May was hired to remove the boat, which remained caught in the surf zone and evidently had been there overnight before people in the area spotted it Thursday morning. The Coast Guard reportedly was called to the scene, but the owner of the boat had already gotten off and walked to the beach, unharmed, before the Coast Guard’s arrival.

Images shared by Sea Tow Cape May show the damage to the boat, which the company said could not be salvaged. The bow had “Starry Night” and “Toms River NJ” painted on it, and the vessel was reportedly registered in New Jersey.

Last night a 35′ sailing vessel ran aground up on the beach in Avalon. The occupant was safely removed by the Avalon…

It’s unclear where the boat had been anchored and how long the owner of the boat remained asleep through the ordeal that led to the vessel’s demise. He’s fortunate to have avoided injury, but hopefully he had insurance for his boat. A Pearson 35 may cost anywhere from about $10,000 to $30,000 depending on its age and condition. They were manufactured beginning in 1968 by Pearson Yachts, the Rhode Island company founded by cousins ​​Clinton and Everett Pearson, and had a run of 14 years during which about 500 of them were built.