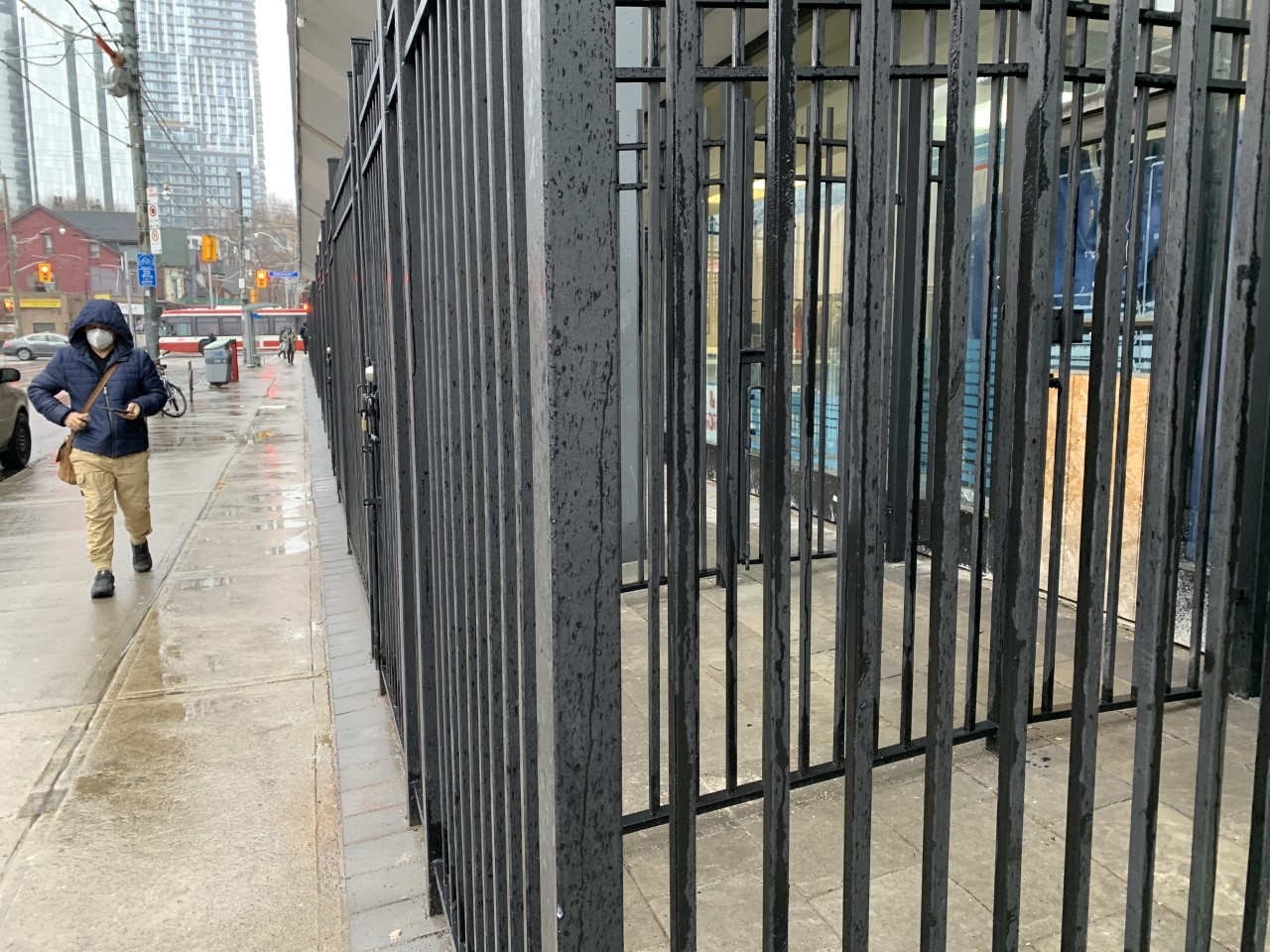 It is arguably one of the city’s most troubled intersections—Sherbourne St. and Dundas St. E.

It is an area place Sultan Hamid – a regular in the area who has been homeless for 15 years – describes as “not really safe.”

“That part is all crack-heads and drugs. But I don’t associate with them,” he said, gesturing to the corner in Cabbagetown South.

On the northeast corner of the intersection, a new security feature wraps around a Toronto Community Housing building that is home to elderly tenants: A permanent, iron fence.

“It’s been there about a month,” a local shop owner said of the fence erected around 310 Dundas Ave. E.

“That was primarily for crowd control. I’m not sure whether it succeeded,” said Diane Walter, executive director of Margaret’s Housing and Community Support Services, which operates a drop-in center that hands out meals and snacks daily.

“The fence … was installed with the support of the building’s tenants as a way to deter people from entering an area that lacks visibility, which historically had been used for illegal activity,” TCH said in a statement.

“The area around this building faces challenges as a result of drug dealing and poverty, but that has not translated into security concerns within the building itself.”

Around the building – especially on surrounding streets – there have long been security concerns.

The Cabbagetown South Residents Association hit its boiling point almost a year into the pandemic and hired private security in December 2020.

“The Residents’ Association and the community of Cabbagetown South strongly believe in protecting our most vulnerable populations,” the association’s letter stated at the time.

“We also believe that our children, elderly, and all residents deserve the same protection.”

Much of the concern was centered on Berkeley, Ontario and Seaton Sts., between Dundas St. E., and Shuter St., where locals say things “have escalated on their streets.”

The community’s letter mentioned ”the level of stress in this neighborhood is unprecedented and unsustainable, and we support the measures our residents have taken to ensure their families are safe in their own homes.”

It said “the city has an obligation to act now and recognize the harm being inflicted upon our neighborhood and others like us.”

Dozens of residents attended a meeting in July 2019, which included Toronto Police officers from 51 Division, to address problems like loitering, drug use on private property, and trespassing.

Among their biggest issues was the impact of an Overdose Prevention Site operated by Street Health and the 24-hour respite/drop-in site run by Margaret’s.

“Every now and then certainly we got complaint,” said Walter, adding they have community outreach teams that try to help

“We would address it. I’m not going to sugarcoat it. That’s just the reality of the corner,” she said.

“But we have been able to manage. We have a community engagement team that goes out into the community.”

TCH, having recently erected that barrier around its building, says it does the same outreach.

“Our Community Safety Unit works with partners in social service agencies to help engage with residents of the area and maintain a level of stability in the community,” TCH said.

From our newsroom to your inbox at noon, the latest headlines, stories, opinion and photos from the Toronto Sun.

Thanks for signing up!

A welcome email is on its way. If you don’t see it, please check your junk folder.

We encountered an issue signing you up. Please try again