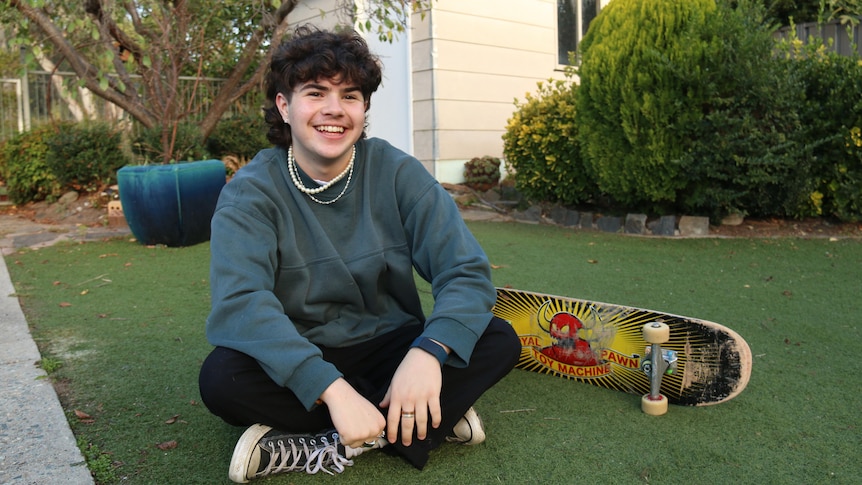 For two years, Nick Dyball felt like he was keeping a secret from his family.

“Trapped is probably the first word that comes to mind,” the now 17-year-old said.

At nine years old, he finally told his parents he was transgender.

“Having that conversation was like having that weight taken off me.”

The change in Nick’s demeanor was immediate.

“I remember very clearly that it was like there was a palpable weight that just lifted off him — he was dancing around after that,” his mother, Rachel Cunneen, said.

The conversation triggered a flurry of activity.

Nick’s pronouns changed and Ms Cunneen assumed the role of advocate, helping her son to navigate Canberra’s health system — a task she described as “like a full-time job”.

“It wasn’t as if there was somewhere I could go to access everything,” she said.

“It was this wandering path to work out what was available, what might be important and how people could help us to navigate this thing.”

“A shortage of available primary care professionals, including GPs, mental health supports and paediatric specialists with an understanding of LGBTIQ+ health needs have exacerbated the issues faced by the LGBTIQ+ community,” the study states.

“This has resulted in significant gaps in health care for LGBTIQ+ people in the ACT… with excessive wait times, delays from referrals and high costs associated with interstate and international travel.”

Where to after coming out?

The first port of call for a transgender person after coming out is usually a general practitioner but finding one in Canberra who is willing to treat transgender patients isn’t easy.

A handful of doctors passionate about this area of ​​medicine do the bulk of the work.

Among them is Dr Clara Tuck Meng Soo.

Demand has grown exponentially in recent years, to the point Dr Soo has closed her books to ensure her patients aren’t waiting more than a month for an appointment.

Yet the pool of doctors open to treating transgender patients in Canberra hasn’t grown.

“I think a lot of GPs feel that they haven’t got the experience or training to work in this area but in fact, it’s not that difficult,” Dr Soo said.

“The attitude and approach is really the most important part of it and the rest can actually follow.

“It’s like any other area of ​​medicine, we learn as we go along.”

For young transgender people, puberty blockers can be an important step towards gender affirmation.

The problem in the ACT is there’s only one pediatric endocrinologist who can administer them.

Nick first started seeing him seven years ago, when he was 10.

“In the beginning, it was great — I was one of only a few trans kids,” he said.

“It was very one-on-one. We would sit and chat, we’d talk about my life, we’d catch up and then we’d get all the gritty stuff out of the way.

“It felt like very personal care and that was really important to me, especially back then when I was feeling very alone at times.”

But as demand grew, the level of care Nick received changed.

“It became a lot more difficult — once I waited in the waiting room for four hours for a five minute check-up,” he said.

“I felt quite disregarded and I didn’t trust my doctor as much as I once did.”

According to the Scoping Study, there are 20 young transgender people on the waitlist to be seen by Canberra’s only pediatric endocrinologist.

Dr Soo said some patients were waiting a year for an appointment.

“For a child who is actually going through puberty, where physical changes are happening very quickly, a year can make a big difference,” she said.

“Those changes can be irreversible, so a child who is suddenly faced with that can find it very distressing.”

The 42-year-old started hormone treatment on her 40th birthday and says transitioning saved her life.

“The dark days are well and truly gone,” she said.

“I really see the world in color as opposed to gray or black and white. Everything is so much brighter.”

Ms Shoring turned to A Gender Agenda — a community organization that supports the intersex, transgender and gender diverse community — for help navigating the health system after she came out.

She is now the organisation’s operations manager and is reminded daily of how the system is failing trans children.

She describes the wait times to see Canberra’s only paediatric endocrinologist as “horrifying” and said the mental health support that’s available is grossly insufficient.

“We’re talking months and months to see a psychologist who can deal with youth here in Canberra,” she said.

And that’s in the private sector.

In the ACT’s public system, there isn’t a single paediatric psychiatrist available to treat patients who are under-18.

The Scoping Study acknowledges the ideal response would be to simply employ an additional pediatric endocrinologist and psychiatrist but states that: “those specialists would need to be suitably trained and have a sympathetic attitude towards treating transgender patients.”

It also adds that Australia is currently facing a shortage of both.

Mental health support is essential, according to Nick.

He admits he was lucky finding his therapist after coming out — cost wasn’t a barrier and therapists weren’t as inundated then as they are now.

“If I hadn’t gotten that, sorry to say it but I would be dead,” he said.

“My mental health hasn’t been perfect but it has been significantly better, being able to see a therapist and ask for help when I need it.

“It’s so important. It’s everything.”

A spokeswoman for Canberra Health Services says its executive director of Women, Youth and Children, Susan Freiberg, is leading a new program of work to design of a new model of care, which will better address the needs of transgender patients and their families.

“The new model of care will provide multi-disciplinary treatment,” the spokeswoman said in a statement.

“It will provide patients and their families with holistic support from specialist allied health, nursing and mental health team members in addition to medical specialists.”

The new model of care is expected to be implemented next financial year.

What advocates say the community needs is a gender hub — a centralized point that connects all the necessary services.

“It would be huge,” Ms Shoring said.

“It would give people a clear pathway in.”

“Parents need a hub — they need a point they can go to where there’s good mental health care and information, medical advice and medical treatment.

“They basically need all the professionals to coordinate that for them.”

That’s what the Gender Service at the Royal Children’s Hospital in Melbourne has been offering to transgender Victorians since 2003.

When it first opened, the service was receiving one referral every two years.

Last year, 821 young transgender patients were referred to the service.

“Victoria has been extremely fortunate with our state government that they’ve supported us not just with resources in terms of funding, but they’ve also invested in creating the systems across primary and secondary care so that we can meet this demand,” the service’s director, Associate Professor Michelle Telfer, said.

“Victoria really has pushed forward in leading the country on provision of this multi-disciplinary collaborative care and what we’re seeing is that it’s producing great outcomes.

“It’s the one way to bring everything together and help coordinate so you can reach the needs of every young person who comes to you requesting your help.”

Associate Professor Telfer is confident the model could be replicated in the ACT.

“The system is not sustainable with individuals working separately — the system requires coordination,” she said.

“But you can’t do it without state government support — that is an absolute.”

The Scoping Study highlights that the ACT is “the only jurisdiction not to have a comprehensive gender-focused health service available either in private practice or through a publicly-funded gender clinic”.

It states that having one is a high priority but concedes “such a service may only be achieved over a number of years”.

“I think the ACT Government really needs to talk to the stakeholders about what can be done now, especially for a population that needs very time-sensitive intervention and care.

“If we are to live up to our moniker of the Capital of Equality, more needs to be done now.”