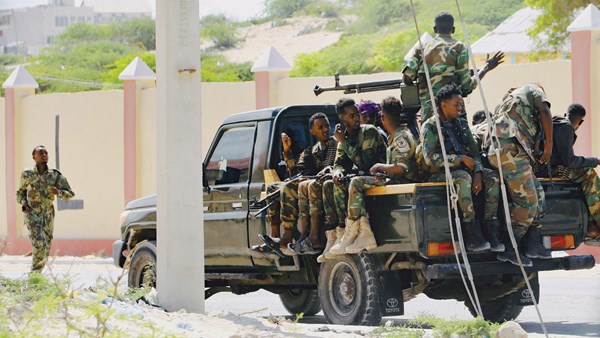 The Somali army took control of several sites that were under the control of terrorists, while Britain warned of attacks in Somalia by the “Al-Shabab” movement during Eid Al-Fitr, while the steps are accelerating to organize the presidential election in order to overcome the constitutional vacuum of the country.
The Somali army took control of areas in the Bay and Lower Shabelle regions in the south-west of the country that were under the control of the Al-Shabab terrorist movement.
Military officials explained that the takeover of the areas under the control of the terrorist movement “Al-Shabab” came after a major security operation carried out by the security forces in the areas of the southwestern governorate of Somalia.
The officers leading the operation confirmed that their objective was to completely free areas of the South West Governorate from the grip of the movement’s fighters and pledged to continue operations until this is achieved.
In addition, the UK government issued a stern warning yesterday over planned attacks by Al-Shabab militants. A statement issued by the British government said that “attacks could occur during Eid al-Fitr, as the group takes advantage of the busy Eid days, and young people also plan kidnappings”.
This came as the heads of both houses of Somalia’s parliament were discussing the law of presidential elections.
Yesterday, the Speaker of the Somali People’s Assembly, Adam Mohamed Nur Madobe, met with the Speaker of the Senate, Senator Abdi Hashi Abdullah, to discuss the upcoming session of Parliament next Wednesday, which is to be joint between the two chambers to discuss the presidential elections and the Somali government’s 2022 budget.
The two heads of parliament also discussed the scheduling of the presidential elections. Representatives who attended the meeting said there was consensus that the two officials should expedite the elections by May and not delay them, in order to take advantage of the limited time available.
The new Speaker of the House of Representatives, Adam Madobe, who officially took office, held several meetings yesterday, where he met with incumbent Speaker Mohamed Abdullahi Farmajo, Prime Minister Roble and opposition candidates and politicians with whom he discussed the organization of the presidential elections immediately and the work of the Somali parliament in a fair and transparent manner in its management of the elections for a new president of the country.