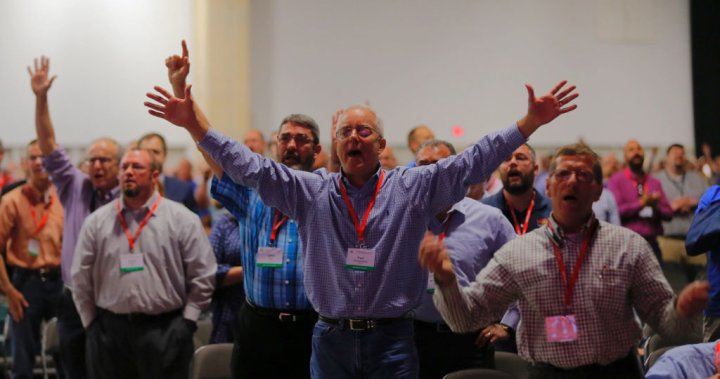 The decision was made in a virtual meeting which was called in response to an explosive investigative report released on Sunday. The 288-page report follows a seven-month investigation that revealed widespread cover-ups and mishandling of allegations of sexual abuse by senior church members.

The report also detailed how former SBC vice president August Boto and former SBC spokesperson Roger Oldham kept their own private list of abusive pastors. According to the report, the list contains 703 names of church abusers. Boto and Oldham retired in 2019.

“Despite collecting these reports for more than 10 years, there is no indication that (Oldham and Boto) or anyone else took any steps to ensure that the accused ministers were no longer in senior positions. power in SBC churches,” the report said.

It’s unclear how many members of the SBC committee were aware of the internal list, but the report said some “had been aware of the existence of allegations of sexual abuse related to Southern Baptists for many years.”

The database will be released on Thursday, but the names of survivors and witnesses will be removed from the reports. The names of alleged sexual predators who have unsubstantiated accusations against them will also be removed.

“It is our commitment and our intention to investigate unsubstantiated allegations, and if others can be substantiated, we will publish them as well,” said Gene Besen, the committee’s acting attorney.

Acting President and CEO of SBC’s Executive Committee, Willie McLaurin, issued a formal apology to the victims of sexual abuse by SBC pastors. There are over 47,000 churches in the SBC.

“We are sorry to the survivors for all we have done to cause pain and frustration,” he said. “It is time to change culture. We must be proactive in our openness and transparency from now on.

During the virtual meeting, committee members and key church leaders pledged to change the culture within the Southern Baptist denomination that has led to stories of survivor abuse being suppressed.

The committee also issued a statement on Tuesday denouncing some of Boto’s remarks, in a rare move to rebuke one of their own.

In 2006, Boto wrote in a letter to a woman who had survived a sexual assault by a youth pastor as a child that “continued talk between us (the executive committee and advocates survivors) will be neither positive nor fruitful”.

The committee’s statement says it “rejects the sentiment (of Boto’s words) in its entirety and seeks to publicly repent of its failure to rectify this position and listen wholeheartedly to survivors.”

The SBC Executive Committee approved the following statement at its meeting on Tuesday, May 24, 2022. pic.twitter.com/VgIA9xDCcI

Besen said committee leaders will also consider revoking the pension benefits of Boto and others who were featured in the report, which was compiled by Guidepost Solutions, an independent investigative firm that works with organizations. nuns.

The investigation was prompted by a growing number of accusations against religious leaders across the United States in recent years.

Following the release of the report, the committee posted many more stories of sexual abuse online as more survivors come forward. Besen said Guidepost was asked to establish a hotline so that survivors “are directed to the right place and receive the appropriate care.”

The hotline number will be made public as soon as it is available.

Johnny Depp returns once again: “I came here and I told the truth”

The sexual abuse task force, named at the request of SBC delegates at last year’s meeting in Nashville, plans to release its formal motions based on the Guidepost report next week. Those recommendations will then be presented to delegates for a vote at this year’s national meeting scheduled for June 14-15 in Anaheim, Calif., according to Pastor Bruce Frank, who led the task force.

Frank, senior pastor of Biltmore Baptist Church in Arden, North Carolina, said the core of the task force’s recommendations based on the Guidepost report would be to prevent sexual abuse, better care for survivors when such abuses occur and to ensure that abusers are not permitted. continue in ministry.

Survivors and advocates have long called for a public database of abusers. The creation of an “Offender Information System” was one of the key recommendations of the report by Guidepost Solutions, an independent firm hired by the SBC Executive Committee after delegates at last year’s national meeting demanded an investigation by strangers.

The proposed database is expected to be one of many recommendations resulting from Guidepost’s seven-month survey presented to thousands of delegates attending this year’s national meeting.

Lawyer and writer Christa Brown, who says she was sexually abused as a teenager by her church’s SBC youth minister, has been lobbying the SBC since 2006 to create a publicly available database of known abusers. She was encouraged by Tuesday’s announcement that the secret list would be made public.

“I hope that happens in the very near future. I will watch and wait,” she told The Associated Press.

“It’s beyond my mind to try to imagine how they could have rationalized keeping this list secret for so many years – since 2007. It suggests a level of moral bankruptcy that I find incomprehensible.”

— With files from the Associated Press

0:49
Indiana pastor confesses to ‘adultery’ with teenage girl over 20 years ago