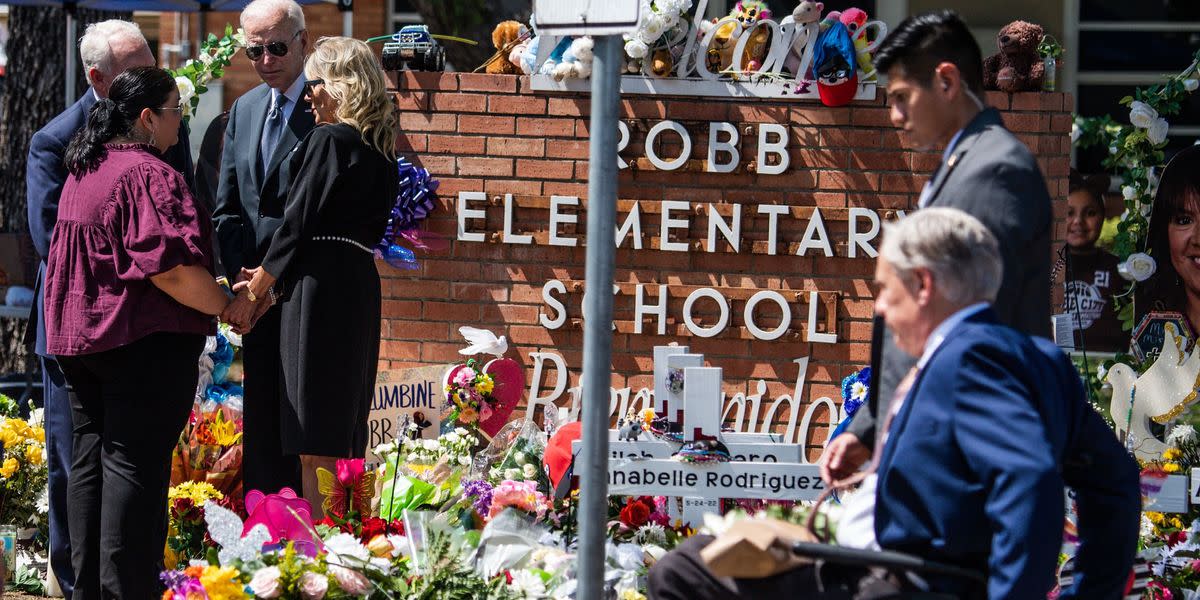 The fenced-in crowd boos and gives a thumbs up to Texas GOP Governor Greg Abbott as he arrives while President Joe Biden and First Lady Jill Biden pay their respects at a makeshift memorial outside the elementary school Robb in Uvalde. (Photo: CHANDAN KHANNA via Getty Images)

President Joe Biden was warmly greeted during his visit to Uvalde on Sunday, but Texas GOP Governor Greg Abbott was loudly booed as he approached the elementary school’s makeshift memorial where 19 children and two teachers were killed last week in a mass shooting.

“Shame on you, Abbott! a voice could be heard amid boos and shouts from the fenced-in crowd of officials visiting the site.

“Please, Governor, help Uvalde County!” We need change! Our kids don’t deserve this,” one man shouted. “Our children are constantly attacked in this community. We need help.”

The community has grown increasingly critical of the Republican governor’s stubborn defense of easy access to firearms, including particularly devastating assault rifles like those used in the elementary school shooting. after being legally purchased by the 18-year-old shooter.

Abbott joined those gathered at the site seconds after Biden and first lady Jill Biden arrived to applause and cheers. The Bidens, both in tears, could be seen talking and hugging school officials.

After a mass later, a crowd outside chanted, “Do something.” Biden responded as he walked out of church: “We will.”

The Bidens spent several hours visiting families of victims and survivors and also met with first responders. Uvalde was Biden’s third presidential trip to a mass shooting site, including one earlier this month in Buffalo, New York, where a white supremacist suspect killed 10 black people at a supermarket.

Following his controversial speech at the NRA convention, Texas GOP Senator Ted Cruz was confronted Saturday at a nearby restaurant by a constituent, who angrily told him, “Nineteen kids are dead! It’s in your hands! Ted Cruz, it’s in your hands!

Texas has seen eight mass shootings in the past 13 years as lawmakers eased gun restrictions.

This article originally appeared on HuffPost and has been updated.