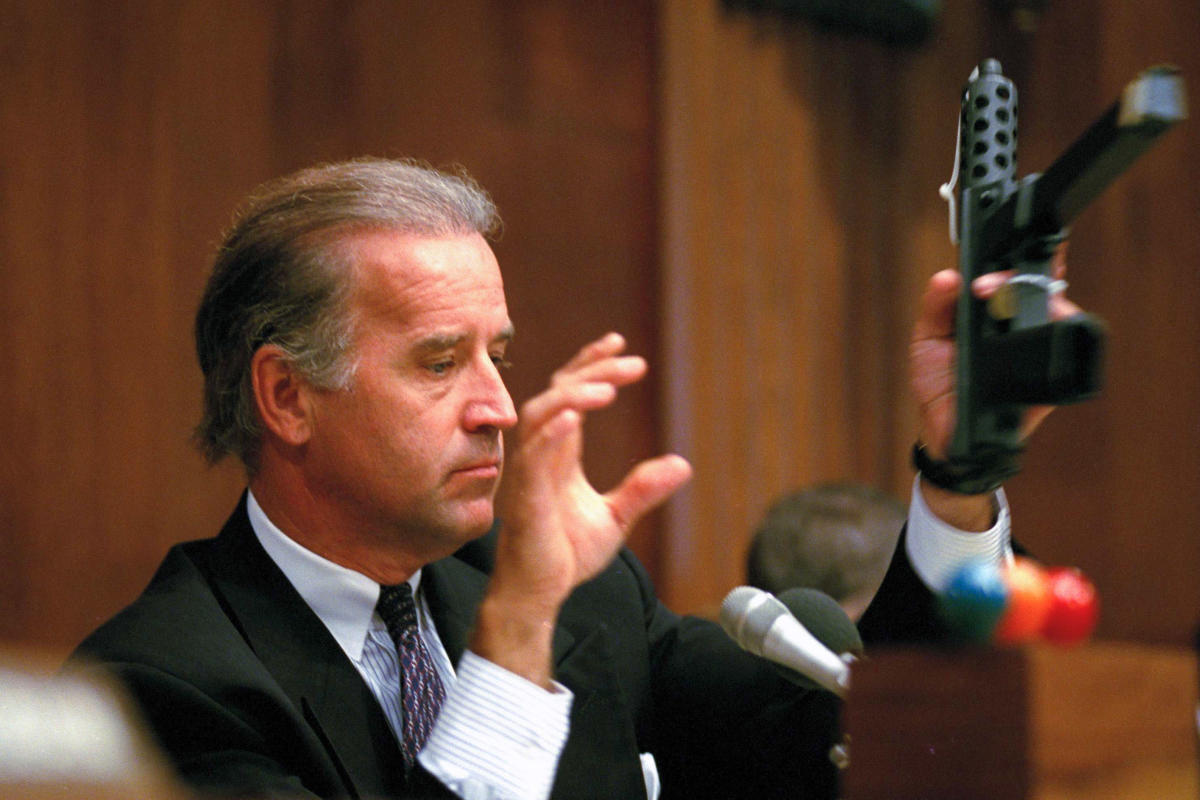 WASHINGTON (AP) — Joe Biden, then chairman of the Senate Judiciary Committee, examined the collection of black military-style rifles displayed in the middle of the room as he denounced the sale of weapons whose “only real function is to kill human beings at a ferocious rate.

That was nearly three decades ago, and Congress was about to pass an assault weapons ban. But the law eventually expired and firearms that were once illegal are now readily available, most recently used in the elementary school massacre in Uvalde, Texas.

The tragedy, which came less than two weeks after another mass shooting at a grocery store in Buffalo, New York, refocused Biden’s presidency on one of the greatest political challenges of his career – the long struggle for control. firearms.

Over the years, Biden has been intimately involved in the movement’s most notable successes, such as the 1994 assault weapons ban, and its most troubling disappointments, including the failure to pass a new legislation after the 2012 massacre at Sandy Hook Elementary School in Newtown, Connecticut. . Now his White House, which was already trying to reduce gun violence through executive orders, is hosting calls with activists and experts to chart a way forward.

“He understands the history of the problem. He understands how politics has changed,” said Christian Heyne, vice president of policy at Brady, the gun control advocacy organization. “He has a sense of missed opportunities from the past and he understands this is his last chance to have an impact on gun violence in America.”

Even for a politician known for his passion, Biden’s reaction to the latest Texas shooting was searing.

“Where is the backbone, where is the courage to stand up to a very powerful lobby?” Biden said Wednesday as he called on Congress to pass new laws.

Stef Feldman, deputy assistant to the president, said the cascade of deaths — from Buffalo to Uvalde to daily shootings that don’t make national headlines — only adds urgency to the efforts of the administration.

“Every story we hear about people lost to gun violence provides more energy, more motivation to keep the work going,” she said. “If we can save even one life by pushing a creative policy idea a little bit harder, it’s worth it.”

But executive action — like Biden’s order targeting phantom guns, which are privately made firearms without serial numbers — may be the best the White House can do if Republicans in the Senate stay. opposed to the new restrictions and that Democrats do not want to circumvent the buccaneers.

Further challenges could arise in court, and even the phantom gun rules could be tied to litigation.

“We need to be clear,” said John Feinblatt, president of Everytown for Gun Safety. “That’s the job of the Senate. It is time for the Senate to step up and do something. (edited) Privately-made guns without serial numbers – could be the best the White House can do if Senate Republicans remain opposed to new gun restrictions and Democrats are unwilling to sidestep the systematic obstruction.

“We need to be clear,” said John Feinblatt, president of Everytown for Gun Safety. “That’s the job of the Senate. It’s time for the Senate to step up and do something.

This is a much different situation than when Senator Biden was working on gun legislation years ago. Fears about violent crime fostered bipartisan compromise, and conservative rhetoric about gun ownership was less extreme.

First, Congress passed the Brady Handgun Violence Prevention Act in 1993, requiring a background check when someone purchases a firearm from a federally licensed dealer. The measure is named after James Brady, the White House press secretary who was shot and wounded when John Hinckley Jr. attempted to assassinate President Ronald Reagan in 1981.

Then Congress approved banning assault weapons as part of the Violent Crime Control and Law Enforcement Act in 1994. The act banned specific weapons, such as the AR- 15, and limited the kind of military-style upgrades the guns could have.

However, the ban contained a sunset provision and it was not renewed in 2004. Although the vast majority of shootings are committed with handguns, military-style semi-automatic rifles are staples of the most mass killings. deadliest in the country.

One of these weapons was used at Sandy Hook, where 26 people, including 20 children, were killed.

The violence shocked the nation, and President Barack Obama called on then-Vice President Biden to lead a new campaign for gun control. The senses. Joe Manchin, DW.V., and Pat Toomey, R-Pa., crafted legislation that would have expanded background checks.

In a speech delivered less than three months after the shooting, Biden said “the excuse that it’s too politically risky to act is no longer acceptable.”

He remembers successfully pushing for a ban on assault weapons years earlier, even though the National Rifle Association warned he was going to “take your shotgun.”

But it worked, and the legislation failed in the US Senate. Biden described the vote as a betrayal of the families who lost children at Sandy Hook, saying, “I don’t know how anyone who looked them in the eye could have voted like they did today. “.

“It’s fair to say that the gun issue has become even more polarized,” he said. “And the intensity of gun rights opposition to any type of gun regulation, however described, has become more adamant.”

Two years ago, firearms became the leading cause of death among children and adolescents, surpassing car accidents. There are approximately 400 million guns in the country, more than one for every person. Military-style weapons are a staple of some Republican campaign ads.

“The reality is we’re not keeping pace with the gun lobby to arm citizens,” said Fred Guttenberg, whose daughter was killed at Marjory Stoneman Douglas High School in Parkland, Florida, in 2018.

“It’s time to start asking,” Guttenberg said, “why are Republicans so diametrically opposed to doing whatever it takes to save lives?”

There have been some successes at the state level, including a recent proliferation of so-called red flag laws, which allow authorities to withdraw weapons from those deemed mentally unstable.

But Adam Winkler, a law professor at the University of California, Los Angeles, said those victories have not matched efforts to ease restrictions. He noted that some states allow people to carry weapons, even concealed ones, without a permit.

“It’s something that was pretty much unheard of when Joe Biden joined the Senate,” he said.

When Biden launched his bid for the Democratic presidential nomination, he said he wanted to bring back the ban on assault weapons “even stronger.”

“And this time,” he wrote in a New York Times op-ed in 2019, “we’re going to pair it with a buyback program to get as many assault weapons off our streets as quickly as possible. possible.”

But there was no political path forward in the tightly divided Senate, and Biden’s primary initial legislative efforts focused on coronavirus relief and infrastructure.

A few months after taking office, the president bristled when a reporter asked if he wasn’t prioritizing gun control.

“I never prioritized that,” he said. “No one has worked harder than I to confront the violence used by individuals using weapons.”

On Wednesday, Biden looked like a president plotting another push to target gun violence.

“I’ve spent my career, as chairman of the Judiciary Committee and as vice chairman, working for common-sense gun reforms,” ​​he said.

“These actions that we have taken before, they have saved lives. And they can start over. »

Read more about the school shooting in Uvalde, Texas: https://apnews.com/hub/school-shootings