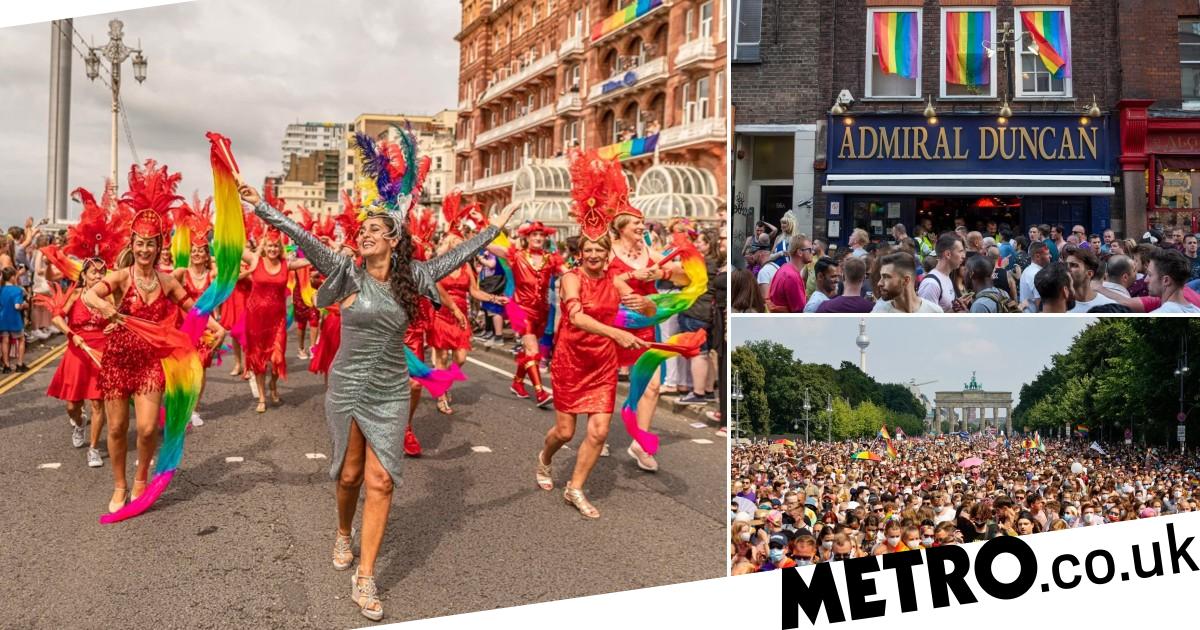 After a few years of absence, this year’s Pride celebrations promise a side of protest with a monumental party.

Bristol, London, Manchester and Brighton are just some of the UK cities unfurling the rainbow flags for a huge showdown.

But it’s not just the UK getting in on the action – there are also big Pride events taking place in Berlin, Sweden and even, uh, Torremolinos!

So put on your makeup, strap on your harnesses and find out where to spread the love this summer.

Torremolinos – until June 5; October 31 to November 6

Yes really. While the Costa del Sol is perhaps best known to Brits as a place of flip-and-flop packages, ask a Madrileño where they go for a lolsy vacation and many will head south to Torremolinos.

So if you’ve done gay Gran Canaria, Madrid and Barcelona, ​​it’s only fair that you give it a whirl.

With its own gay district, La Nogalera, and a handful of gay beaches in and around the town, as well as one of Europe’s largest gay hotels, Ritual, it is now so popular that this year it is launching two prides – one in summer, one in winter.

Want to visit? Beyond the beaches, shop along Calle San Miguel or soak up the peace at Parque La Bateria.

Pride in London marks 50 years since the UK’s first Pride Parade by retracing the original 1972 march from Hyde Park Corner to Whitehall.

Events elsewhere are still to be confirmed, but around 1.5 million people are expected to turn up, all clubs will be doing specials (early bag tickets) and, at 4 p.m., Soho will turn into a village party-cum-rave (if you grew up in a village where everyone walks around in vests clutching a box of G&Ts, that is). Stuck in.

Want to visit? Head to the Tower of London to see Superbloom, a sea of ​​flowers for the Queen’s Jubilee (tickets £13.20).

Stay: The brand new Amano in Covent Garden has rooms from £179.

Brighton Pride is part of the city’s DNA, so everyone gets involved. You’ll find uni friends partying in the streets in Kemptown, crowds at the We Are Fabuloso festival in Preston Park (tickets from £32.50) and families quietly waving the flag in the parade, whose theme is 2022 is ‘Love, Protest and Unity’.

Given the expected 300,000 people, most events are ticketed, so plan ahead. If you are not local, sort your return route. Watch out: those trains! A three-day cacophony of screams. Not that it is otherwise.

Want to visit? A walk around the lanes offers independent shops. For a bit of kitsch, visit the Royal Pavilion (tickets £17), a former seaside retreat of King George IV.

Stay: Sleep by the sea at Malmaison Brighton, with rooms from £149.

For an LGBT+-tinged urban getaway, try Scandinavia’s biggest Pride in Stockholm. The festivities take place over a week, with the main parade attracting around half a million people.

There’s also Pride Park, which features the usual stages and exhibits (plus an 18+ kink zone), and Pride House, which offers workshops and talks all week.

After wandering around and soaking up the rainbow vibes in one of Europe’s friendliest and most civilized cities, head for a sunset drink and dip at Malarpaviljongen, a Iconic gay floating restaurant and bar for everyone’s welcoming scene in Stockholm.

Want to visit? A pilgrimage to the Abba Museum takes you on an interactive journey through one of the great pop bands (tickets £22.60).

Stay: Downtown Camper by Scandic has rooms from £98 pn.

And there’s also Stadtfest, held a week before around Nollendorfplatz, with an alternative queer Berlin vibe (think a demo with guys chatting casually in puppy masks).

Here to go clubbing? Advanced tickets are essential for big guns such as Berghain (prices vary).

Want to visit? Escape the craziness as you stroll through the Tiergarten and trade vintage vinyl and retro yarn at Mauerpark, one of the city’s biggest Sunday flea markets.

Stay: The Art’otel in trendy Mitte has rooms from £98.

Bristol’s Pride features over two weeks of events and activities across the city, from June 25 to July 10, including the ever-popular dog show (categories include ‘most like owner’ and ‘best musical session “).

There is also the Queer Vision Film Festival, the fortnight of which will culminate with Pride Day on Saturday July 9 on The Downs. Carly Rae Jepsen headlines, while Ana Matronic headlines the after-party at the O2 Academy (tickets £12).

A supporter wristband will cost you £7.

Want to visit? Take a street art tour to see how Banksy started (tickets from £7.50) and, if it’s hot, cool off at Clifton Lido (swimming for non-members, £20) .

Manchester Pride ditched superstars and its MCR Pride Live event and returned to its roots this year with a focus on being a protest again rather than a pop concert.

So expect a colossal parade and the Gay Village Party but also a candlelight vigil, the Youth Pride MCR, the Family Pride MCR and the Human Rights Forum.

Our advice? Superbia Weekend, a free queer culture festival that takes place in alcohol-free venues, is the perfect cerebral accompaniment to the main shebang.

Want to visit? Eat your way around Ancoats, the city’s hippest new foodie district – from small plates and natural wine at Erst to modern British at Mana by former Noma chef Simon Martin.

Stay: The cool Cow Hollow Hotel has rooms from £119.

MORE: A Swedish village paints an entire street with the colors of the rainbow flag in time for Pride

MORE: As Pride approaches, businesses must learn to truly be allies

Get essential travel news, inspiration and tips from Metro every week.