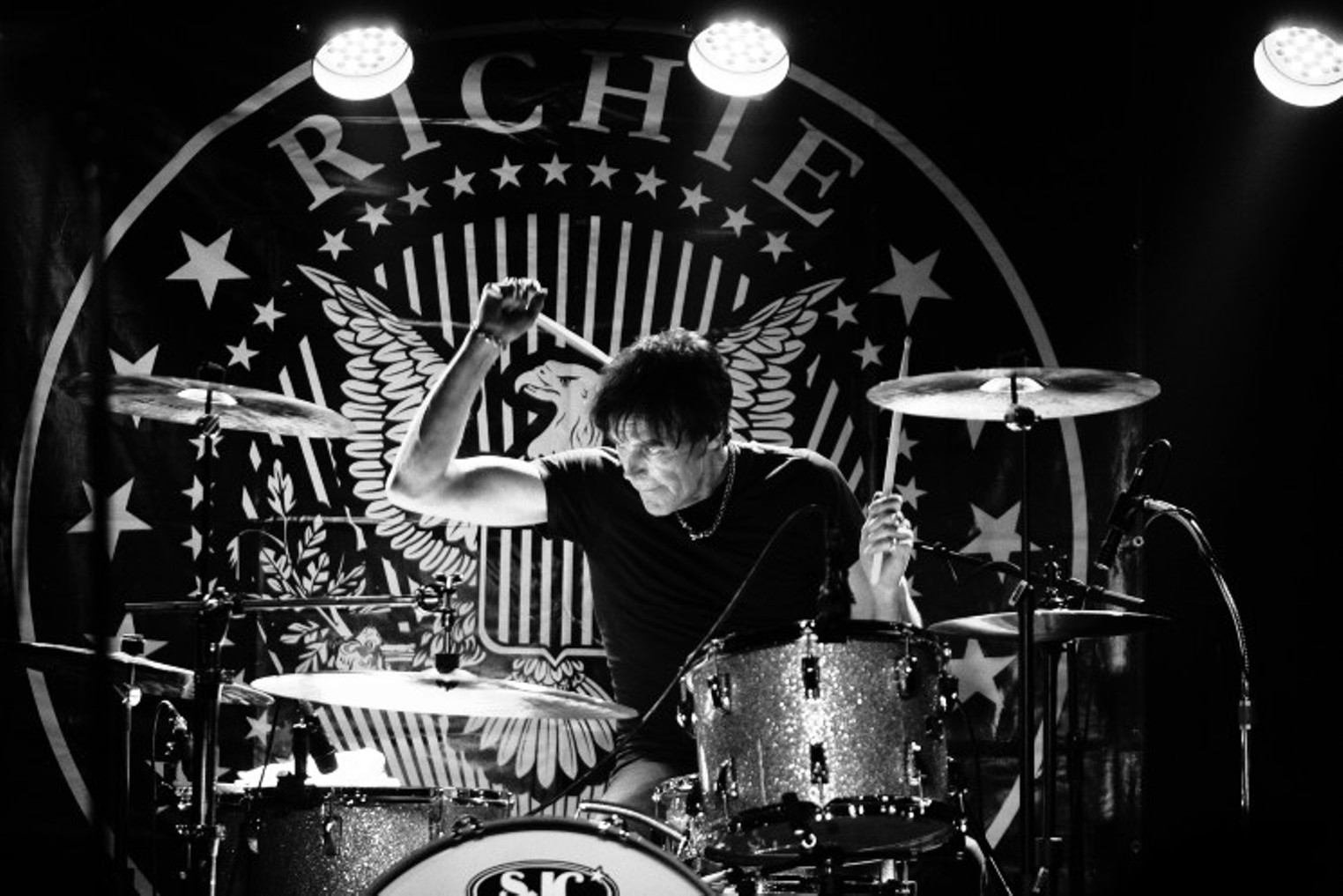 When you think of the Ramones, you think New York City. Punk music’s most influential band formed there and exploded into music history from the East Village’s famed CBGB. Talking with Richie Ramone, the band’s drummer and the prominent keeper of the Ramones’ flame in 2022, you can even hear the lilt of 53rd and 3rd in his voice.

You might not necessarily think Houston when talking Ramones, but it’s undoubtedly part of the conversation these days thanks to Richie Ramone, who is currently on tour and headed for the Secret Group on April 16. Ramone’s got a new single to promote, performs his own original songs and plays a healthy dose of Ramones favorites, many of which he wrote, in concert.

As a member of Ramones in its mid-1980s period, Richie toured the world over with his late, great bandmates, Joey, Johnny and Dee Dee. They performed hundreds of shows together during Richie’s time behind the drum kit. While they faced a lot during that specific era, they never faced the challenge of overcoming a worldwide pandemic.

“We were on the front end of COVID, we were in Europe, we’d just started a European tour and we only got six or seven dates in in March of 2020 and then they started shutting down Italy and everything. We were in Germany and it finally hit Berlin and they shut the whole city down,” Ramone recalled. “It was interesting watching it from Europe, what was going on in the United States. Luckily, I was able to change flights and we got the last flights out of there.

“Right now, we wanted to come out again. I think there are people that are still leery, on the fence about coming out, you know, so the crowds are a little off-numbers,” he said. “People are dying to get out, but my crowd isn’t like 18 year-olds, you know what I’m saying? They’re a little older. But, it’s going good, it’s fun to be out again and I’ve got a really good band, everybody is happy and getting along and real eager to perform.”

The band’s got a new Richie Ramone song to perform on the tour, which is playing 20 different cities 20 nights in a row. The song is titled “Not Afraid,” and it’s the lead single to an upcoming album.


“It’s not really about COVID. This song, first of all, was written by Marc Diamond from the Dwarves. I was on tour with them two years ago or three years ago and I said, ‘Marc, you’ve gotta write me a song,’ and finally he wrote me this song. It really had nothing to do with COVID but I loved the lyric in it and it sounds great. Not many people write songs for me and I was really pleased that somebody wrote me a complete song that I could lyrically make my own.

“Here’s the thing about songwriting – you gotta understand I don’t like to say what songs are about,” he added. “I want people to interpret it in their own way. I try not to be too specific when people go, ‘What’s this song about?’ unless it’s totally obvious.”

Having new music and mixing songs from his two previous albums into the set allows Richie to put his stamp on the Ramones experience, as does selecting his own crackerjack band. The band includes Houstonian Chris Moye, a veteran drummer who has played with acts like Die Fast and Patterns and has helped usher in new Houston drumming talent as an instructor at School of Rock. Ramone said he met Moye by way of another Houston rocker, Prophets of Addiction guitarist Glenn Gilbert.

“It’s weird, I had two Houstonians at one point. On one tour, I don’t know, 2018 or 2019, I was auditioning guitar players and it didn’t work out with this guy. After two days, it wasn’t working, I’m not going to say names or nothing, and the tour was happening in a week,” Ramone shared. “GG Sleaze, or Glenn Gilbert, was in town, he came down and he filled in and he played with us for like two years. And then he left and that’s how I got Chris involved because he was from Houston, too. I put him and got him involved.”

“I can recognize two beats per minute going off and when you start to slip a little – because this kind of music, there’s no backbeat to it – you’ve got to constantly push, so the snare drum is always right on that two and oven – bow, bow – you know? Constantly pushes, as soon as it slips to the backbeat, I can feel it. 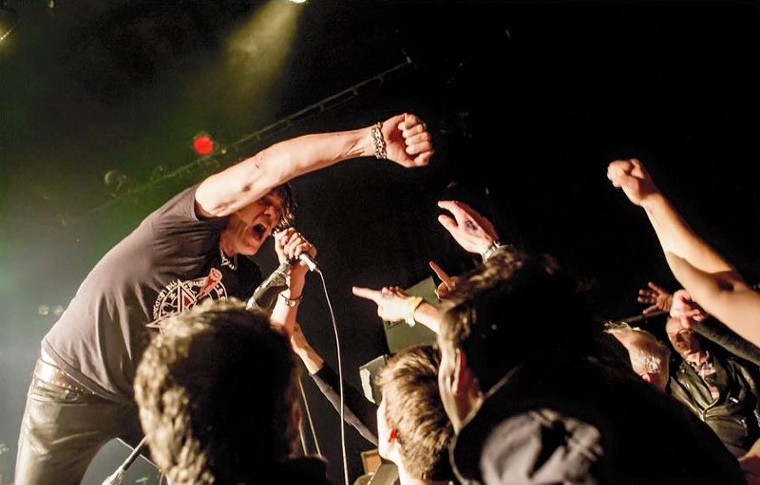 “Last night was I think his best show ever, he’s really taken charge now,” Ramone said of Moye. “He’s like a kid in the candy store, he loves it so much. We’re at the Hard Rock Hotel here in Atlantic City and I see him enjoying himself and that’s what I want, I want these guys to enjoy themselves, and that’s why I like getting him from Houston, because I don’t have to deal with a Hollywood drummer, it’s a different vibe.”

“I’ve beat him on the head many times because he’s gotta be my protegee,” Ramone continued. “He needs to play like I play so that’s a lot of learning to do to come into this thing, but boy he’s doing a really good job right now. He just improves every night. That’s what I wanna see.”

The Houston pride keeps going, from Gilbert to Moye to a local business fueling the 2022 version of Hey! Oh! Let’s Go!

“I give a shout out to Salyers Percussion, they’re my new endorsee for my drumsticks, that’s where Chris works at and I fell in love with this drumstick that he was playing so now the Richie Ramone stick is being made by them, so that’s a new thing happening right now.”

We note it’s a tough gig stepping into the shoes of a Ramones drummer. Traditionally, it was the one instrument that had the most turnover, from Tommy to Marky to Richie and back to Marky. The things that Richie loved about the gig were touring and getting the freedom to contribute in meaningful ways to the band’s legacy. Over three albums – Too Tough to Die, Animal Boy and Halfway to Sanity – he wrote more songs for the Rock and Roll Hall of Fame group than any of its drummers, including hits like “Somebody Put Something in My Drink” and “I’m Not Jesus.”

“I thoroughly enjoy it because I have friends all over the world and it’s nice to visit them whenever we can visit them. It’s wonderful. I get to eat and drink the wines of the world. It’s just so much fun,” he said. 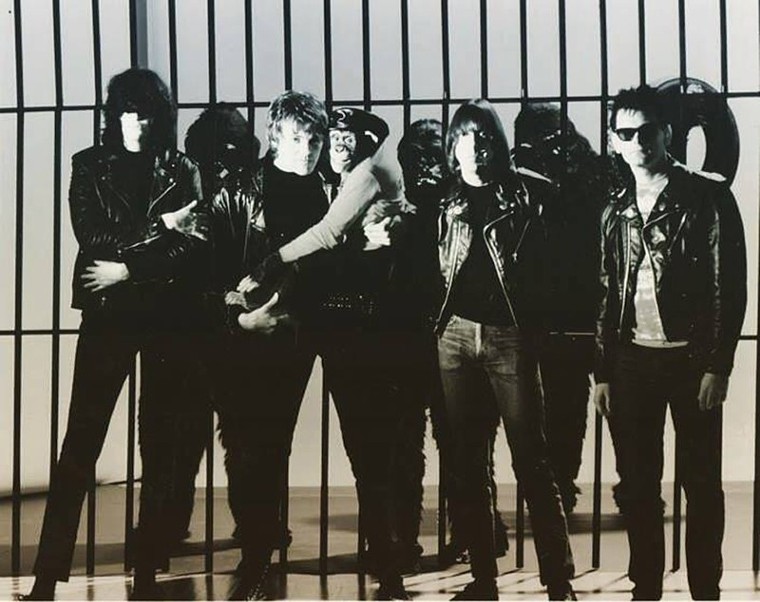 The Ramones during the Animal Boy era

“Joey pushed me into writing, you know, I had written a few things but nothing heavy. But Joey, he was so supportive of me. Find a lead singer who says, ‘Richie, do more. I want you to sing. We’re making a new record, now go home and you write some songs.’ We hit it off. For five years I was inseparable from that guy. He was the one who made me feel so comfortable. He was so secure behind his rose-colored glasses. A lot of lead singers are like, ‘Oh, you’re the drummer, stay back there and be quiet and do your job.’ Not Joey. He kept pushing me to the front, pushing me to the front, God bless him.”

God bless him, indeed. Not only did Joey’s encouragement boost Richie’s confidence, it helped save the band during a trying transitional period. It also honed Richie’s skills as a performer, skills he relied on to this day to bear the Ramones’ long-burning torch. The most difficult aspect of carrying the flame is it can burn so brightly his own music can get lost in the glow. He’s an accomplished drummer and a well-rounded musician who has composed and performed classical compositions.

“I’m stamped with that on my forehead, you know?” he said of keeping Ramones music alive. “I definitely have my own style of writing and my own sound now, I’ve really developed into my own artist. It took one or two records to really find my path that way.”

He said his audience skews older, but we discussed how the music passes down from one generation to the next. It still feels vibrant and new because new, young fans are ever being introduced to it.

“You know why they endure? Because they’re great songs and they changed generations. They changed the sound of music in the ’70s, you know? When you have a band like that, that comes out when disco was at the forefront and just blasts through – millions of bands, they made them pick up guitars and form after Ramones,” he said. “Their music was good, it’s comical a little bit, the lyrics and stuff like that. And, when you hear a Ramones song, it doesn’t sound dated. That’s the killer thing about it. You can hear a song and go, ‘Oh, that’s ’80s,’ you know? But with the Ramones it’s timeless and it’s just wonderful.

“And it works well with my mix of my material because I play songs I wrote for the Ramones in my day and I play some of the classics and then I play stuff off my two albums and my future album coming out. And they all work together. It’s not like ‘Oh, that’s a Ramones song, oh that’s a Richie song,’ it’s still aggressive and hard, which is the way I still like to perform.”

“They taught me a lot of things that I take with me to this day,” he said of his iconic bandmates. “I give them all the respect I can. I want them to be looking down saying, Richie, you’re killing it. You’re doing it right, you’re doing the right thing. They’re always still on my mind.”