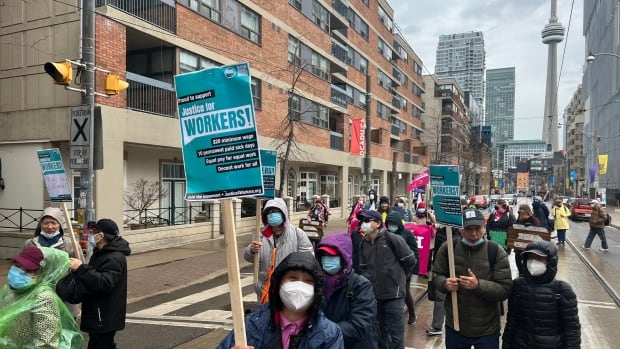 Gabrie Stephen, an emergency physician who spoke to CBC News in Grange Park, said healthcare workers have been working through the COVID-19 pandemic and are tired of seeing the impact of precarious work and health issues. workplace and their impact on people.

“Workers have long fought for paid sick leave, we know this is a basic measure that improves people’s health,” Stephen said.

Sunday’s rallies, held in rainy and cold weather, include a joint climate justice workers’ protest, a Peel workers’ justice protest, an anti-Premier Doug Ford rally organized by the Ontario Coalition of health and a protest by Filipino workers.

Stephen said all workers should have a minimum wage of $20 because income is something that affects people’s ability to stay healthy.

“I’m here because I believe everyone deserves status for all. I believe no worker should be here to fight and stay here because they can’t quit their job… worried about be expelled,” he said.

“There are so many precarious work issues that we face here. We are here for May Day and it is our International Workers Day, so we are here in solidarity with workers because we know that work and work determines people’s health.”

Monieya Jess, a Jamaican migrant worker, said she is currently unemployed after quitting her job due to poor working conditions.

Jess says she joined the joint protest of climate justice workers to demand “status for all”.

“I’m a former farm worker. I used to work on a farm and the condition was really bad, so I decided to stop working there because it’s not good for us, humans,” she told CBC News.

“The task is really difficult… when you go to bed to sleep, you are always in pain. You ask to go to the doctor, they refuse to take you. So, I decided to leave.”

Meanwhile, hundreds of workers and community members gathered at Queen’s Park as part of the Ontario Federation of Labor rally.

OTF said the action is part of a province-wide mobilization to demand a worker-focused agenda and ensure the issues that matter most to workers and their families are on the table during June 2 provincial elections.

“Today, in every region of this province, we come together to show what is possible,” said OTF President Patty Coates.

“We are advancing our vision for the Ontario we need and mobilizing to earn it.”

The OFL said International Workers’ Day this year falls on the eve of the provincial election in Ontario.

“As the provincial election approaches, we’re making sure workers’ issues are on the table,” Coates said.

“We need better in this province. This means a $20 minimum wage, decent work, affordable housing, permanent paid sick leave, well-funded public services, living income support for all, climate justice, status for all, and an end racism and oppression.”