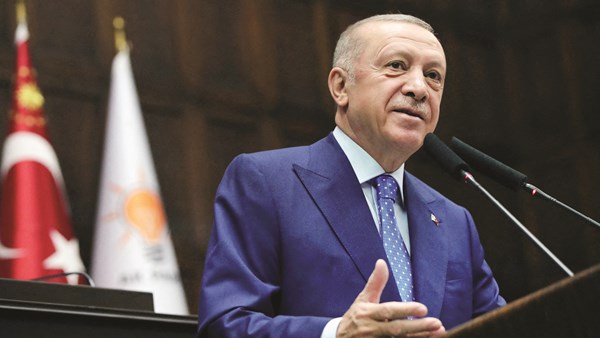 Yesterday, Turkish President Recep Tayyip Erdogan stressed that his country could not “let pass any attack against him from northern Syria”, in reference to the Kurdistan Workers’ Party (PKK).
Erdogan’s position came in response to a question about the possibility of launching a new Turkish military operation in northern Syria. The Turkish president was talking to reporters on the plane when he returned from a visit to Azerbaijan.
Erdogan stressed that “Turkey does not take anyone’s permission to fight terrorism”.
Erdogan referred to the presence of “hots” in which known “terrorist organizations” are concentrated in northern Syria, explaining that these organizations are active in areas stretching from the northeast to the northwest of Syria.
He stressed that Turkey cannot ignore these facts and that the operations against the PKK and its offshoots in northern Syria have become more urgent and important than the operations that Turkey is carrying out against the organization in northern Syria. Iraq.
Erdogan added: “As I always say, we will surprise them one night and we have to.”
In response to a question about whether there is communication with the United States about a possible military operation, Erdogan said: “First of all, everyone should do their part regarding these issues. “.
Meanwhile, Turkish media quoted Erdogan as saying that the talks that took place between Turkey and delegations from Finland and Sweden last week were not at the “expected level” and that Ankara could not accept the entry of countries “supporting terrorism”. in NATO.
Turkey has opposed Finland and Sweden joining the alliance, putting on hold a deal that would have allowed a historic expansion of the alliance in the face of Russia’s attack on Ukraine . Erdogan’s recent statements indicate his continued opposition to their joining the Western Defense Alliance. Two sources told Reuters earlier that the talks held last Wednesday did not make much progress. It was unclear when further talks would take place. The consent of all 30 NATO member states is required to expand its membership.
Turkey rejects Finland and Sweden’s request to join NATO on the grounds that they harbor people linked to the nationalist Kurdistan Workers’ Party (PKK) group and others whom Ankara considers to be terrorists.
Erdogan also said he wanted to see an end to the tragic crisis between Russia and Ukraine as soon as possible, but the situation was getting worse day by day.
He said he would speak today by phone with Russia and Ukraine, adding, “We will continue to encourage both sides to pursue avenues of dialogue and diplomacy.”