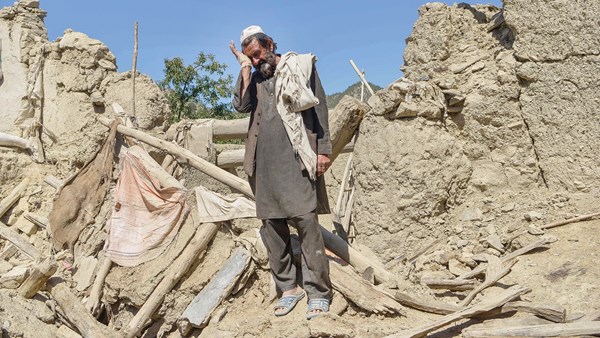 The UAE called for intensified efforts to meet humanitarian needs in Afghanistan, stressing that the Afghan people cannot be abandoned. In a statement to the UN Security Council, she expressed her sincere condolences and sympathy to the families of the victims of the devastating earthquake in southeastern Afghanistan, as well as her sincere wishes for a speedy recovery to the injured.
“The United Arab Emirates will always be ready to relieve the suffering of the Afghan people, including by starting to provide aid to support them in this great calamity,” said Amira Al-Hafeiti, Deputy Permanent Representative of the State to the Council of security. statement.
She added: “We must pay adequate attention to the deteriorating humanitarian situation in Afghanistan. Although we were able to avert a humanitarian catastrophe last winter, there is a continuing rise in poverty and hunger rates, according to a recent report by the Secretary-General. .”
And she continued: “Afghanistan, unfortunately, has become an example of millions of people facing food insecurity due to high food prices, fertilizers and fuel to feed the hungry).
She said, according to the statement, that these conditions are exacerbated by the recent earthquake and its devastating impact on people in the areas it hit.
The UAE welcomed the adoption of Security Council Resolution 2615, which includes a humanitarian exemption from the sanctions regime established by Resolution 1988, as this step is considered important to facilitate the delivery of humanitarian assistance and other activities that meet basic humanitarian needs in Afghanistan. .
“We encourage all donors to make every effort to ensure that people on the 1988 sanctions list or who have links to terrorists cannot benefit from aid intended for the Afghan people,” he said. Al-Hafiti said in the statement.
The UAE also reiterated, according to the statement, that access to education for women and girls and their participation in all aspects of public life is not considered optional, as the chances of recovery from Afghanistan are doomed if half of its population continues to be marginalized. , calling on this Council to continue to demand the reversal of the Taliban’s decision to deny girls secondary education and to demand the full, equal and meaningful reintegration of women into society.
The UAE stressed that the United Nations Mission in Afghanistan (UNAMA) must continue to implement its overall mandate by engaging with the Taliban in a structured dialogue and conveying messages to the international community.
Regarding the security situation in Afghanistan, the United Arab Emirates said in the statement: “The recent report by the monitoring team of the sanctions committee established under resolution 1988 indicates that Afghanistan has been the victim of several terrorist attacks in recent months and that some of the terrorist groups, including ISIS in Khorasan, have been able to build their capacities and financial resources, which aggravates the difficulties in maintaining security in the country and controlling the activities of these terrorist groups, as we have seen this month after the recent attack on a temple in Kabul and the bombardment of a crowded market in Nangarhar. She explained that, as highlighted in the recent report of the Secretary-General, the Taliban should engage in a serious and constructive dialogue with the international community to fight terrorism.