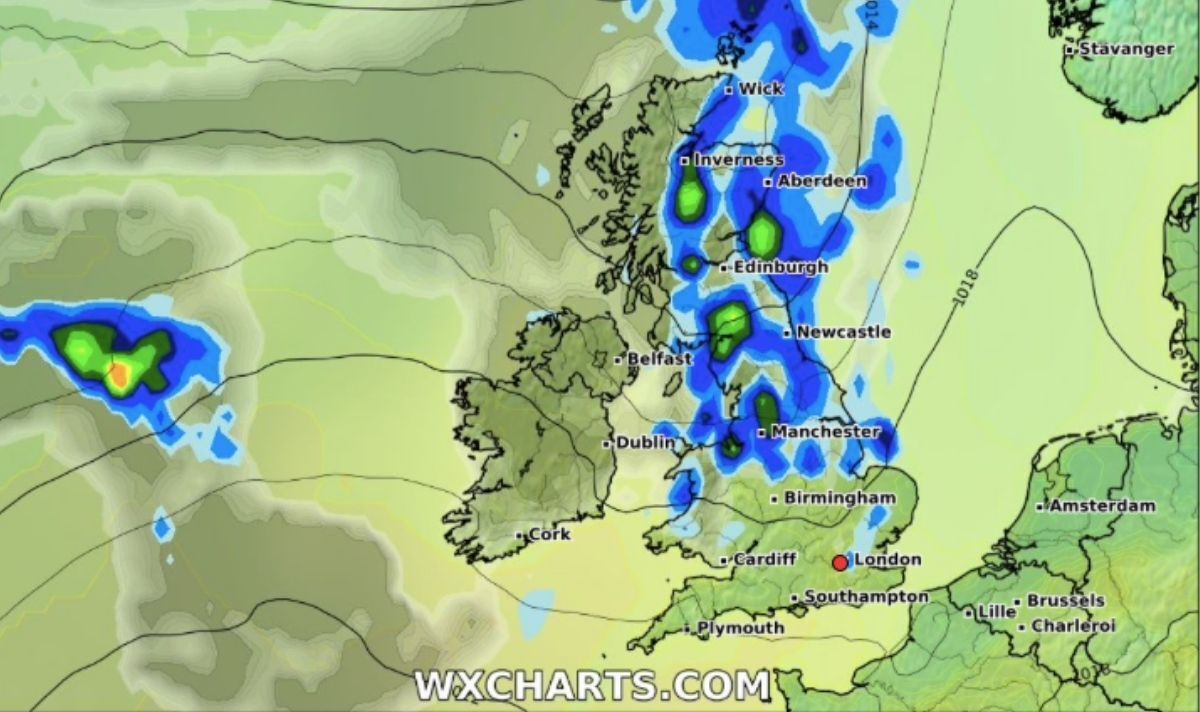 Met Office meteorologist Alex Deakin said dry sunny weather “is on the way out” for the foreseeable future and the final day of the bank holiday weekend will see the country “between and between weather systems”. With the arrival of a low pressure front, Mr Deakin said it will be “difficult to determine where we are likely to see sun”.

Similarly, BBC weather reporter Ben Rich noted: “Overall April was a dry month in many parts of the UK.”

He added “this changed in some northern areas on the last day of the month” and we can expect that to continue.

A frontal system will arrive from the west from Monday and it will encounter highs that will bring scattered showers.

Mr Rich said there will be a “cloudy start” to Tuesday, but claimed “things [will] clearing up in parts of Wales and southern England it could trigger some pretty heavy showers and we’ll see scattered showers in Northern Ireland later today.”

Average temperatures of 15°C and 16°C are forecast for Monday and Tuesday, with a potential warming of a degree or two by Wednesday.

Over the next few days, nights will remain relatively mild with very little risk of frost, with average temperatures around 7C and 9C.

The Met Office’s long-range forecast for the end of the week shows “longer spells of rain are expected in the west and north-west, spreading south-east throughout the day, but that sunny periods are still developing in places”.

ALSO: Is there an Outlander Season 7? The future of the show explained

Temperatures could even reach 21C in parts of southeast England.

The Met Office also warned that pollen levels will be high in most parts of England and average in the north of the country on Thursday.

According to WXCharts, Britons could see a band of heavy rain moving in from the northwest on Sunday evening which could move rapidly across the UK within 24 hours.

However, even further forecasts through the middle of next week show larger bands of rain moving in for the foreseeable future.