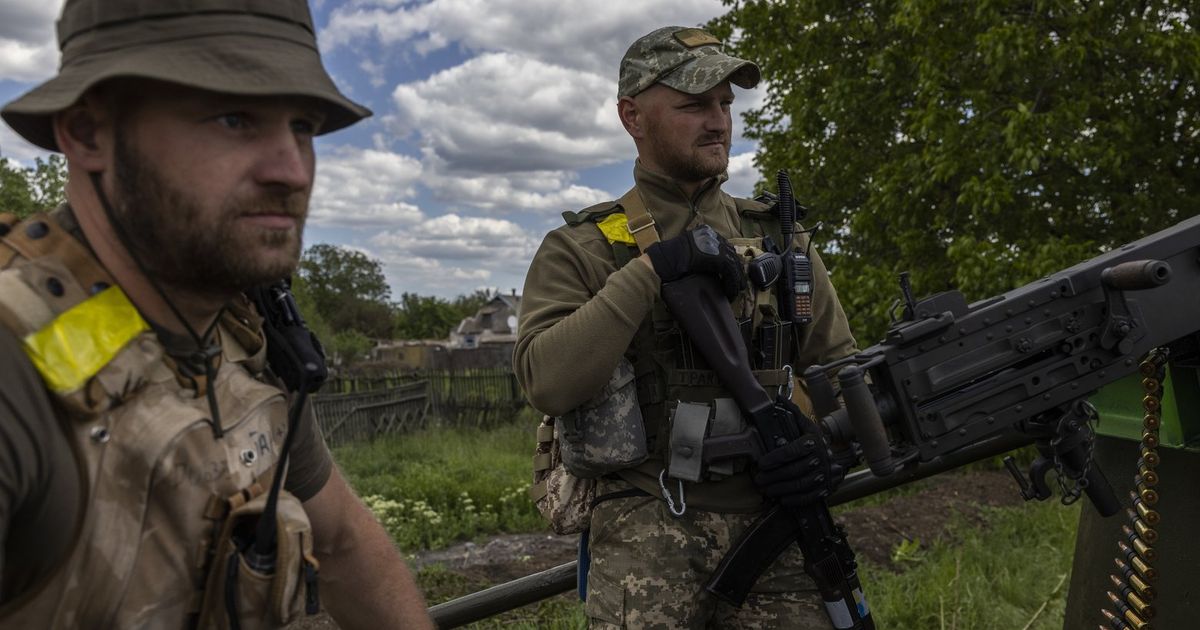 Three months ago, Pvt. Roman Verediuk worked as a forest ranger in a national park in western Ukraine.

Today, he is part of a two-man team operating a Browning machine gun on the front line of war in the eastern region of Donbass. His partner, Pvt. Ivan Ilkiv, drove a tractor.

They are members of the Territorial Defense Forces, an all-volunteer military organization whose ranks swelled in the early days of the war. The force issued rifles to civilians who wanted to defend their towns or villages against Russian invasion, and no military training was required.

Most Territorial Defense Force volunteers operate in their hometowns or at checkpoints away from the front, but some have become fighters in the east.

Verediuk, 32, said he volunteered to come to the front to avoid fighting the Russians near his home in the west of the country. “If the enemy reaches my house, it will be too late to protect it,” he said.

This week, the two volunteers were keeping a position observing the route the Russians might take to advance on the village of Novopil in the Donetsk region in eastern Ukraine. They had received their machine gun three days earlier and had welded a mount to their personal car to enable it to fire from the vehicle.

The fields around them were dotted with craters from shelling earlier in the day, and the smell of smoke still hung in the air.

Novopil, a point in a sea of ​​farmland in Ukraine’s wide-open eastern steppe, sits next to a road that Russian forces had used to control access to areas to the north. As the Ukrainians sought to regain control of the road, the village became a major battleground for a month.

No regular soldier could be spared for the counterattack on the village, so a brigade of volunteer Territorial Defense Force retook Novopil last week, in a significant battlefield success for the organization.

“It’s not ideal that a territorial defense brigade has to fight for such an important part of the front line, but it’s not like there’s a choice,” Colonel Oleksandr Ihnatiev said. , Brigade Commander. The fighters were supported by artillery, air force and tanks, he said.

During patrols, the brigade is a motley group. Older men with gray beards walk on paths through the tall spring grasses of the steppe, past bomb-damaged houses. The fields stretch to the horizon without natural barriers, creating a sense of exposure.

In the village, volunteers patrol past the body of a Russian soldier lying next to a cinder block shed and stop to rest in the shade in abandoned and damaged houses.

They wear helmets with green ribbons woven into them, to blur the profile of their heads as protection against snipers.

The group may be made up of inexperienced fighters, Ihnatiev said, but “their training was already in combat.”