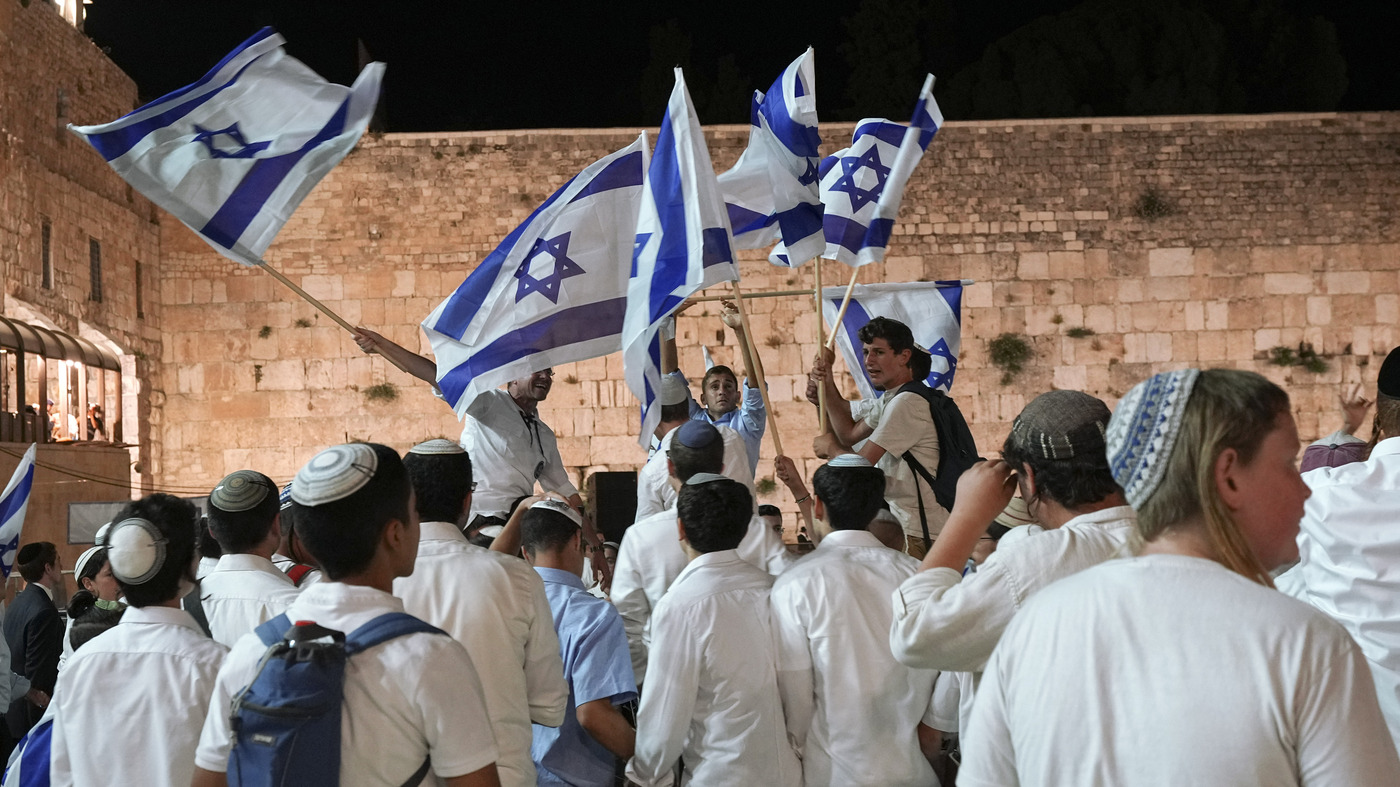 Members of Jewish youth movements dance and wave Israeli flags on the eve of Jerusalem Day, an Israeli holiday celebrating the capture of the Old City in the 1967 Middle East war, next to the Western Wall, the site of the holiest place where Jews can pray, in the Old City of Jerusalem, Saturday, May 28, 2022.

Members of Jewish youth movements dance and wave Israeli flags on the eve of Jerusalem Day, an Israeli holiday celebrating the capture of the Old City in the 1967 Middle East war, next to the Western Wall, the site of the holiest place where Jews can pray, in the Old City of Jerusalem, Saturday, May 28, 2022.

JERUSALEM — More than 2,500 Jews visited Jerusalem’s most sensitive holy site on Sunday ahead of a nationalist parade through the Old City, prompting Palestinians barricaded inside Al Aqsa Mosque to throw rocks and fireworks on visitors and nearby Israeli police.

Thousands of police were deployed across the city for Sunday’s march, in which flag-waving Israeli nationalists planned to march through the heart of the main Palestinian thoroughfare in the Old City.

Israel says the march is meant to celebrate its capture of East Jerusalem, including the Old City, in the 1967 Middle East war. Israel annexed East Jerusalem in a move that is not internationally recognized and claims the entire city as its capital.

But Palestinians, who seek East Jerusalem as the capital of a future state, see the march as a provocation. Last year, the parade helped spark an 11-day war between Israel and militants in Gaza.

Ahead of the march, Prime Minister Naftali Bennett said that “flying the flag of Israel in Israel’s capital is an obvious thing” and that Israel had made that clear “from the start”. At the same time, he asked attendees to celebrate in a “responsible and respectful way”.

Thousands of people normally take part in the march through the Old City’s Muslim quarter, including some who shout nationalist or racist slogans towards Palestinians, before heading towards the Western Wall in the Jewish quarter.

Last year, after weeks of Israeli-Palestinian unrest in Jerusalem, authorities changed the route of the march at the last minute to avoid the Muslim Quarter. But by then it was too late, and Hamas militants in Gaza fired a barrage of rockets towards Jerusalem as the procession began. This sparked 11 days of heavy fighting.

Hamas leaders in Gaza praised what they called “the great heroism” shown by the Palestinians at Al Aqsa earlier on Sunday. “The Arab-Palestinian Islamic identity of the Al Aqsa Mosque will be protected by our people and their valiant resistance with all their might,” said Hazem Qassem, spokesperson for the group.

The group, however, may be hesitant to get involved in another round of fights. Gaza was hard hit by last year’s war, and the territory is still struggling to repair the damage. In addition, some 12,000 Gaza workers are now allowed to work inside Israel as part of efforts to maintain calm between the enemies. Resuming fighting could risk losing those jobs, which have given a small boost to Gaza’s devastated economy.

Early on Sunday, some 1,800 Jews visited the disputed hilltop compound where the Al Aqsa Mosque is located, according to Israel Police.

Al Aqsa is the third holiest site in Islam and serves as a powerful symbol for Palestinians. The complex is also the holiest site for Jews, who call it the Temple Mount and revere it as the home of biblical temples. Competing claims to the site are at the heart of the Israeli-Palestinian conflict and have sparked numerous waves of violence.

Dozens of Palestinians barricaded themselves inside the mosque and began throwing objects and fireworks as Jewish visitors began arriving.

Among the visitors was Itamar Ben-Gvir, leader of a small ultra-nationalist opposition party and supporter of the late racist rabbi Meir Kahane, who entered with dozens of supporters under heavy police surveillance.

The Palestinians shouted “God is great” while Ben-Gvir, accompanied by the Israeli police, shouted “the Jewish people live”. Police said they locked the doors of the mosque and said they made 18 arrests. No injuries were reported.

Without explanation, Israeli police took the rare step of barring Palestinian journalists, including an Associated Press photographer, from entering the compound.

Police also said dozens of visitors to one of the Jewish groups “violated visiting rules”. He said the group was kicked out and some people were arrested.

The police statement does not provide further details. But under longstanding arrangements known as the “status quo”, Jewish visitors to the compound are not allowed to pray. In recent years, however, the number of Jewish visitors has increased dramatically, including some who have been spotted praying quietly.

Such scenes have made Palestinians fear that Israel is plotting to take over or divide the region. Israel denies these claims, saying it remains committed to the status quo.

Police later said Palestinians threw rocks and bottles at security forces near Damascus Gate, at the entrance to the Muslim Quarter. Policemen were seen beating Palestinians. Police said three people were arrested and an Israeli bodyguard was lightly injured.

Israel National Police chief Kobi Shabtai said his forces were prepared for “all scenarios” and took “immediate and professional” action when needed.

“We will not allow any incitement or rioter to sabotage today’s events and disturb public order,” he said. By noon, the visits had temporarily ceased and the situation had calmed down.

Jordan condemned Ben-Gvir’s visit to the site and warned that the “provocative and growing march” could make matters worse. Jordan controlled East Jerusalem until Israel captured it in 1967 and it remains the guardian of Muslim holy sites.

Meanwhile, some 19 Israelis have been killed by Palestinian attackers in Israel and the occupied West Bank in recent weeks, while more than 35 Palestinians have been killed during Israeli military operations in the occupied West Bank. Many of those killed were Palestinian militants, but several civilians were also among the dead, including Shireen Abu Akleh, a well-known correspondent for the Al Jazeera satellite channel.

Israel captured East Jerusalem, along with the West Bank and Gaza, in the 1967 Middle East War. The internationally-backed Palestinian Authority, which administers areas of the Israeli-occupied West Bank, seeks to create a Independent state in these three areas.