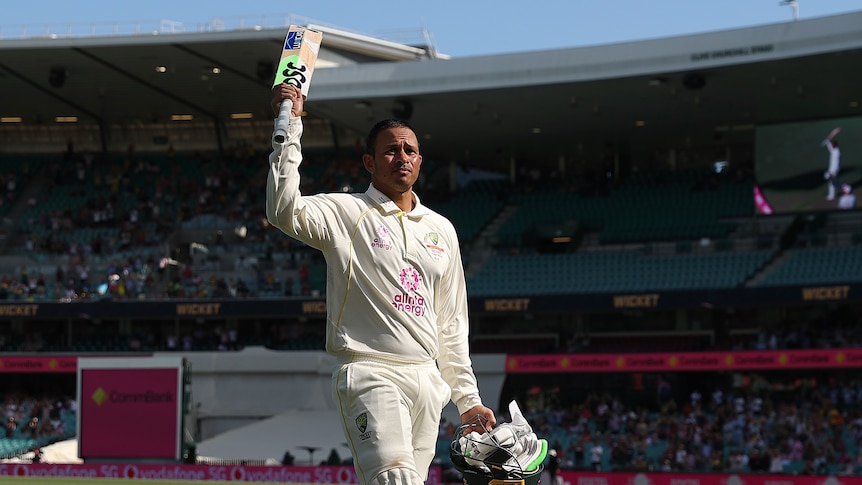 What a joy Usman Khawaja is.

How else can you describe it? How many other cricketers can make you smile so much just by looking at them?

On day four in Sydney he gave Australian cricket another gift, becoming the third man in history to score a century in each round of an SCG test.

His first century on Thursday was rich in context, a celebration of what he has overcome, who he is and what Australian cricketers can be.

But this one, that streak of goals in the sunny Saturday afternoon, was pure and simple pleasure, a carefree display of an athlete’s most elegant stick so comfortably in his fluid state he was barely sweating. .

These were Ussie’s greatest successes from start to finish: the effortless driving of cover, the grace of the shots, the unorthodox ease of the reverse sweep. You could have looked at these snaps in silhouette and instantly knew that they belonged to Khawaja.

He and Cameron Green reunited at a difficult time with the game still hanging in the balance. Jack Leach had just beaten Steve Smith and had Australia’s swing turned into a collapse England’s path to victory would have been incredibly wide.

The pair navigated that awkward initial spell, knowing the old adage holds as true at the test level as it does in Grade 3: The time to cash is after tea.

Khawaja found his accelerator and sped up to his historic century, before Green joined in releasing the valve of a 50 of his own.

England’s promising position had entirely evaporated and their thoughts had undoubtedly already shifted to the important task of beating around 100 overs to save the test.

At this point, England wouldn’t have been the only ones looking to the future.

When Khawaja passed his 50s, Australia’s managers are said to have slumped down a bit in their chairs, suddenly struck by a nasty selection headache.

However, by the time Khawaja celebrated his century – the whole SCG chanted his name and the engraver was preparing to perform his version of a cut and paste – this headache was cured. The solution, while perhaps unpleasant, was now inevitable.

Khawaja cannot in good conscience be abandoned for the fifth test in Hobart. If it were to be left out, the whole fabric of what selection means for the national team would be shattered.

Travis Head will be available for selection, after being cleansed of COVID-19.

Like Khawaja, but to a lesser extent admittedly, he tried his luck with a fine century during the first Test in Brisbane. He is worthy of his place in the middle order.

Green’s innings blew up his batting cobwebs, but what he offers as a bowling option is quite essential for an Aussie team looking to heal their fast-paced bowling cartel throughout the series.

If Green were to fail, he would have to be replaced by a player of similar talent in bowling, although this discussion is no longer necessary.

Steve Smith, David Warner and Marnus Labuschagne are locks. So who does this leave?

Marcus Harris. A man Australia had hoped to give to the entire series to assert their rights, and whose position has become more comfortable less through his own performance than through the team’s results.

No longer a rookie at this level, Harris has played 14 tryout games now without a breakthrough. There hasn’t been a shortage of left-hander scrap and fighting – the exact qualities that made him so attractive to Justin Langer – but not enough runs.

The good news is that Khawaja is averaging almost 100 when opening the staff at Test level and, in case you haven’t noticed, he’s in a pretty good position.

It also opens the door for Khawaja to lock down a position in the Australian squad for the upcoming tour of Pakistan, a trip of some significance for a man who was born there but never played a test there.

Maybe we are getting too far ahead of ourselves. There is still one test to be won in Sydney, and thanks to a strong start for the England opener and sketchy predictions for Sunday, it is far from a given.

Whatever the outcome, it will be remembered as the Khawaja test. Here are many more.