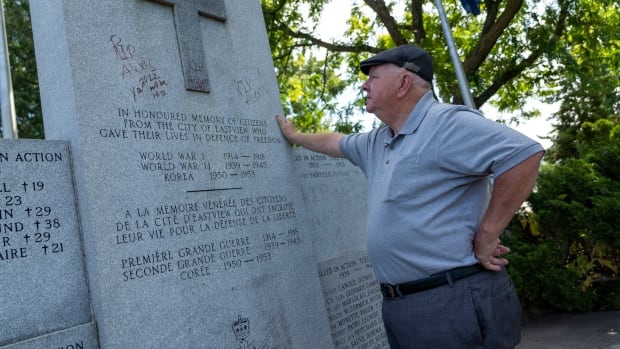 The names of soldiers who died in the service of their country are engraved in stone on a cenotaph in Ottawa’s Vanier district, but a new name has recently been added.

This was scribbled in felt-tip pen on the marble.

The words appear at the base of a cross near the top of the marker and are repeated on both sides of it. It is also scattered elsewhere in the memorial.

Members of Royal Canadian Legion Branch 462 tend to the Eastview City Cenotaph and say they are upset by the vandalism.

“This is hallowed ground,” said Henry McCambridge, the branch’s third vice president. He described those who defaced the site as “little snot-nosed puppies”.

However, it appears the posts were written out of grief, not disrespect, according to locals.

Residents shared that Alexis was the name of a woman who spent time in the small park that surrounds the memorial. They said she had a good heart, but sometimes struggled.

“She was never really able to get the help she needed,” said Jean-Claude Lamothe. “There’s a lot going on here.”

But he said he was also upset about the vandalism.

“We all have different ways of grieving, but to begin to desecrate a property like this is outrageous.”

Residents of the community surrounding the Cenotaph said they believed Alexis was the person who was killed in a nearby collision on July 22.

Police previously said a 31-year-old woman was fatally hit by a vehicle at the intersection of Marier and Deschamps Avenues around 5:43 a.m. that day.

Investigators did not release the name of the victim.

On Friday, a police spokesman said the investigation was ongoing and no further details were available.

“We are unable to confirm if any words on the stone relate to ongoing investigations,” Const. Mike Cudrasov in an email.

A memorial dedicated solely to Alexis is a short drive from the Cenotaph, where Marier Avenue meets Montreal Road.

Flowers, stuffed animals and messages of love and peace cover a tree. “RIP Alexis” is written on a pizza box in the same marker color as the words on the Cenotaph.

“They should never touch our hallowed ground again,” the legion’s McCambridge said, adding that there has been a recent trend of using cenotaphs and other memorials as sites to share personal opinions.

“Please don’t use us as a puppet for other issues.”

The Vanier BIA, which represents hundreds of area property owners and businesses, arranged to have the cenotaph cleaned Friday afternoon.

Chief executive Nathalie Carrier said she believed the words on the cenotaph shared an important message “about how vulnerable women in our community are going missing.”

Erasing the words on the cenotaph is not intended to erase the loss felt by those who cared about the deceased woman, she added.

“We are removing this message, but we are not removing this story and the importance of telling the stories of vulnerable people.”