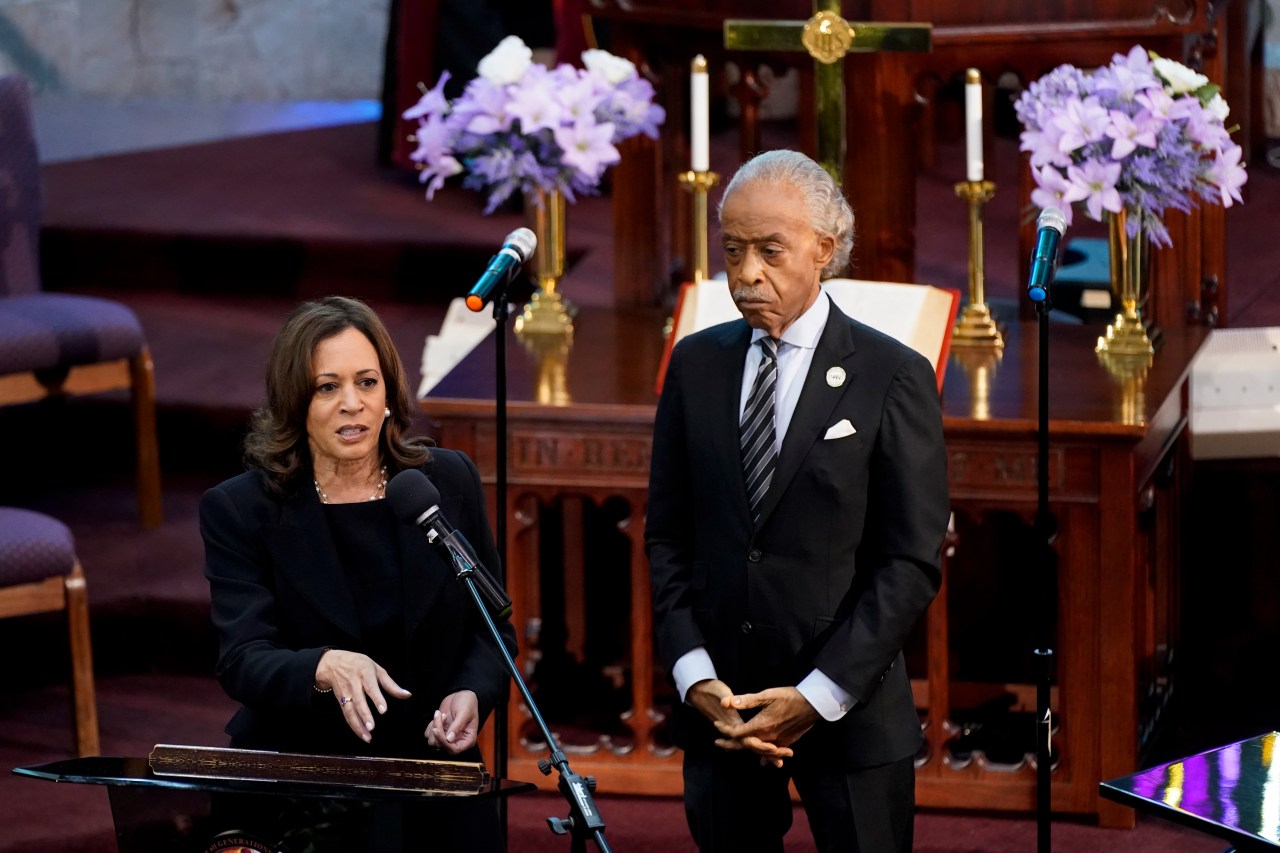 Around 10:30 a.m., Harris and Emhoff arrived at Olive Mount Baptist Church for the memorial service for Ruth Whitfield, 86.

Whitfield, the mother of former Buffalo Fire Marshal Garnell Whitfield, was shopping at Tops after visiting her husband in the nursing home, her family said.

“Our family was torn apart,” Garnell said two days after the shooting. “It was devastating. It’s like someone ripped out our hearts.

The vice president was not expected to make remarks during the service, but the Reverend Al Sharpton called Harris to the pulpit to speak because of who she represents. As the first black and Asian vice president, he insisted that the highest official speech in the country be given to those present.

“She said, well, I’m coming, but I don’t want to say anything, because I don’t want it to be political, I just want to attend the service,” Sharpton said. “But, I will break protocol. I think we should insist on hearing from the Vice President of the United States of America, the Honorable Kamala Harris.

In a moment of levity, Harris came up to the pulpit and said, “I won’t say anything to Reverend Sharpton at this time,” Harris said in response to his request to speak.

How to help those affected by the Buffalo shooting

“The pain this family is feeling right now and the other nine families here in Buffalo, I can’t even begin to express our collective pain as a nation for what you are feeling in such an extreme way,” Harris said. “Not just losing someone you love, but through an act of extreme violence and hatred. And I believe our nation is currently experiencing an epidemic of hate.

Harris pointed to scripture when talking about the idea of ​​strength and that a true measure of strength is “not based on whom you defeat, but on whom you lift up.”

“It also means that in this understanding of strength, we will not allow little people to create fear in our communities,” the vice president said. “Let us not be afraid to stand up for what is right, to speak the truth even when it may be difficult to hear and speak.”

Harris called on all “good people, people who love God” to stand up against hate and come together and not allow hateful people to divide our communities.

“I’m here to say we’re all in this together. No one should ever have to fight alone. We are stronger than those who try to hurt us,” Harris said.

His visit included meeting with the families of the victims, hearing their concerns as well as a visit to the Tops on Jefferson memorial. Mayor Byron Brown applauded Vice President Harris and President Biden for their visit to Buffalo, saying it means a lot to families.

Before leaving Western New York, the vice president called for tougher gun laws, including a ban on assault weapons, universal background checks and age limits on buying a gun. firearm.

“It was designed for a specific purpose: to quickly kill a large number of human beings. An assault weapon is a weapon of war,” she said at Buffalo Niagara International Airport before boarding Air Force Two.

Harris added that the United States is governed by rules aimed at preventing harm and promoting safety.

“We’ve already had over 200 mass shootings in our country and it’s barely June. We all have to agree that we have to do something and it is within our power to do it. Congress must act,” Harris said.

The funeral can be watched in full in the video player just above. Vice President Harris’ remarks can be seen below.

Patrick Ryan is a digital producer who has been part of the News 4 team since 2020. Check out more of his work here.