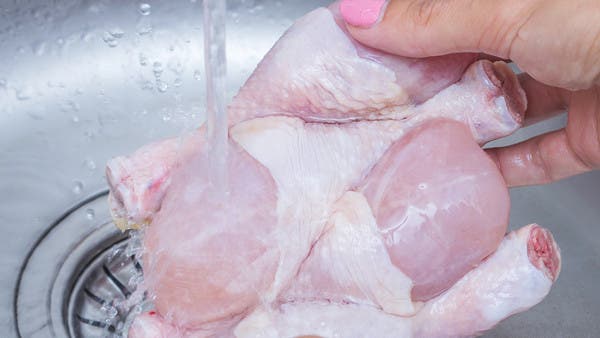 The controversy continues over whether or not to wash chicken and meat before cooking, despite warnings from many experts about the danger of doing so, for several reasons, including fears of spreading any harmful bacteria and its transmission. to food or other utensils in the kitchen, and the possibility of a person being at risk of food poisoning.

Although the National Health Service in Britain and the Food and Drug Administration in the United States have repeatedly advised against washing raw chicken, recent research shows that 25% of people still do it.

In context, food hygiene expert Adam Hardgrave explained that “many people think chicken needs to be washed, even if it’s not necessary, cooking it thoroughly kills all the germs”.

But new research has revealed the safest way to do it, if the ‘chef’ insists on washing the meat, according to the ‘Daily Mail’.

A number of physicists at Montana State University have confirmed that keeping meat near the faucet under a constant flow of water reduces the risk of spreading bacteria. However, they point out, there is still a lack of scientific research assessing the extent to which microbes are transmitted by dispersed droplets.

The researchers placed raw chicken under dripping faucets and monitored the spread of water and bacteria to nearby surfaces. The results showed that when the chickens were placed 15.7 inches (40 cm) below the tap, 8.6 inches (22 cm) of water spilled out.

However, when the chicken was placed 6 inches (15 cm) below the faucet, the drops dispersed 2 inches (5 cm).

When he turned on the faucet with the chicken already under it, the first jet of water sent out droplets.

But even so, when he put the chicken under the tap when the water was already running, the splashing was reduced.

Pay attention to this

Overall, the results indicated that if you insist on washing the chicken, you should keep the meat close to the faucet under a constant flow of water.

It’s also important to thoroughly clean all nearby surfaces and keep any other raw food out of the sink.

The UK’s National Health Service advises special care to keep raw foods away from ready-to-eat foods such as bread, salad and fruit, as these foods will not be cooked before eating, so ‘they won’t kill the germs that reach them.