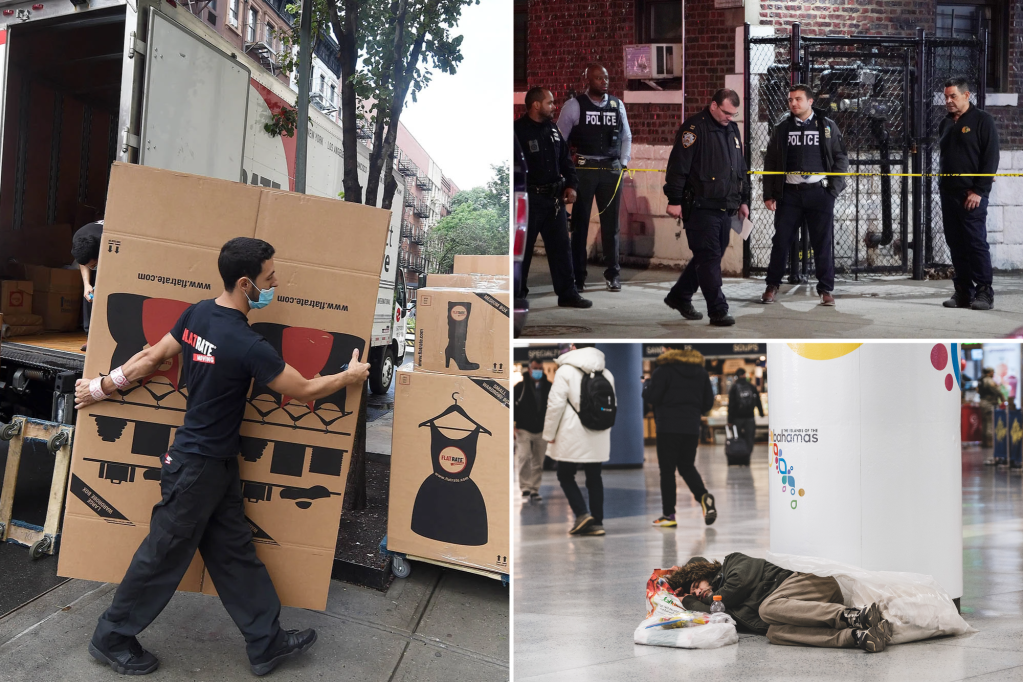 With violent crime on the rise and showing no signs of a let up, a majority of voters said their family would be better off if they fled New York City, a new survey reveals.

The poll, released Wednesday by Fontas Advisors/Core Decision Analytics, presented voters with this statement: “My family would have a better future if we left New York City permanently.”

The poll found 59% of respondents strongly or somewhat agreed with the statement, while 41% somewhat or strongly disagreed.

That’s a 12 percentage point jump from voters who were asked the same question a year ago.

Meanwhile, 54% of registered voters said the Big Apple is on the wrong track, while 46 percent said it was heading in the right direction.

Crime is by far the most pressing issue on voters’ minds – 41% cited public safety as their most important issue – more than double the 19% of respondents who said inflation/cost of living/gas prices was their biggest concern.

“Crime is the cloud hanging over New Yorker’s heads right now,” said Matt Lien, Vice President at Core Decision Analytics. “New Yorkers are unsure of their future here and want to see change in their neighborhoods. Address crime and you will change New Yorker’s current outlook.”

No other issue cracked ten percent.

For example, only 10 percent combined cited reopening the economy following the coronavirus pandemic and job creation as a top issue. Only 9% of respondents chose homelessness, 8% housing, 7% health care access, 3% police reform and accountability and 2% education.

Fortunately for Mayor Eric Adams, voters are in sync with his public safety agenda, according to the survey. The poll precedes his 100th day in office on April 11.

A staggering 95% of voters approve of increasing penalties for gun traffickers, 92% support giving judges more discretion to impose bail on defendants, 85% endorse the creation of the NYPD’s new anti-gun unit with modified uniforms, 80% approve of removing homeless encampments and 77% agree the police should be used to remove homeless individuals from the subway system.

But 62% of voters also agreed with the statement that New York officials have to balance stricter law enforcement with other societal solutions to deal with the root causes of crime, while one-third were opposed.

The poll also showed that New Yorkers overwhelmingly favor reinstating mask mandates — if there’s another serious COVID-19 outbreak, — with 75% saying they would support reinstating a mask mandate in public schools under those circumstances, even for kids who’ve been vaccinated. Only 25% of respondents opposed a mask mandate if there’s COVID flare up.

In the event of an outbreak, 75% of voters would either support reinstating mask mandates (47%) for patrons at restaurants and other indoor venues or vaccine mandates (32%), with the rest opposed or having no opinion.

Voters also support some of the existing policies as part of the city’s reopening strategy.

For instance, 71% of respondents support the mandate that all city employees be vaccinated and 73% back requiring private sector employees who work in-person to get COVID shots for protection.

Elsewhere, 63% support the decision to lift mask and vaccine mandates for customers in restaurants and other in-person venues.

Voters are more divided on requiring unvaccinated kids ages 2 to 5 to be unmasked in school or day care facilities– 54% approve while 46% disagree. Also, 52% approve allowing students over the ages of 5 to be unmasked regardless of vaccination status, compared to 48% who disapprove.

On other issues, 74% of voters support converting commercial Manhattan office space into housing, and 73% back expansion of scooter and electric bike rentals.

Only 53% of respondents support opening a casino in Manhattan while 47% object. Govt. Kathy Hochul and state lawmakers are moving to issue three casino licenses in the downstate region.

In addition, 56% of voters support congestion pricing or higher tolls on cars entering the Manhattan business district while 43% disagree.

A majority – 55% support constructing a professional soccer stadium in the city.

Likewise, 53% of voters oppose having driverless cars operating in the city.

Fontas Advisors/Core Decision Analytics queried 840 registered voters from March 28-31. The survey has a margin of error of plus or minus 3.3 percentage points.