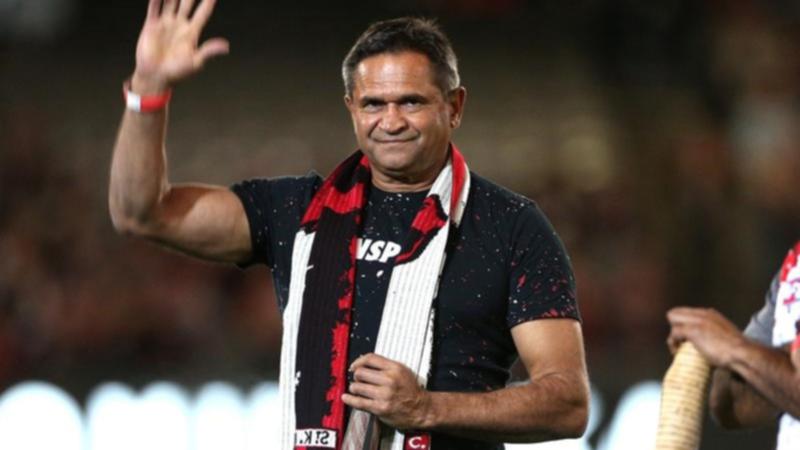 He’s at the heart of the AFL’s Aboriginal round, he designed St Kilda’s Guernsey for the occasion and now Nicky Winmar helps provide the soundtrack.

The Saints great played the didgeridoo during the pre-match ceremony for their game against North Melbourne on Sunday at Marvel Stadium.

His cousin Fabian Winmar joined him in the didgeridoo duo.

Winmar, whose middle name is Elvis, also thrilled Saints fans during the COVID-19 lockdown two years ago when he busted the didgeridoo in a mid-game online forum.

Guernsey features a silhouette of the iconic moment in round four of the 1993 season when Winmar lifted his sweater and pointed his hide after Saints scored a famous win over Collingwood at Victoria Park.

Magpies fans had racially abused Winmar and team-mate Gilbert McAdam and his defiant gesture is an iconic moment in Australian sport.

A statue commemorating the moment was unveiled outside Optus Stadium in Perth three years ago.

He was a two-time All-Australian and also won the Saints’ Best and Most Beautiful twice, as well as being named on a wing in St Kilda’s Team of the Century.