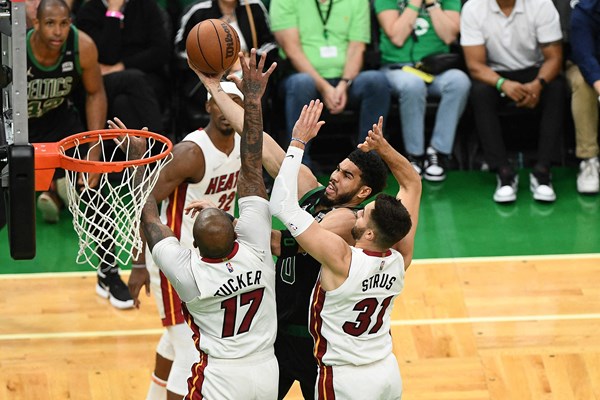 Jason Tatum scored 26 points, grabbed 10 rebounds and provided 6 assists, to help the Boston Celtics win 100-96 over the Miami Heat in Game 7 of the Eastern Conference Finals and reach the NBA Finals.
Marcus Smart added 24 points with nine rebounds and Jaylen Brown scored 24 points for the Celtics, who reached the league finals for the first time since 2010.
Tatum was named the East End Final’s Most Valuable Player.
Jimmy Butler scored 35 points and grabbed nine rebounds to lead the Heat in scoring, while Pam Adebayo added 25 points and grabbed 11 rebounds.
Butler missed a three-pointer with 16.6 seconds left that could have given the Heat the lead.
The Celtics will meet the Golden State Warriors in the league final, and the first game between them will be in San Francisco on Thursday.
Boston has shaken off a five-game losing streak to reach the league final.
After trailing the Heat by 17 points in the second quarter, they closed the gap, dropping 82-79 in the fourth quarter.
But Boston again widened the difference to 11 points with 6 minutes and 36 seconds left.
The score was 98-85 with three minutes and 35 seconds remaining, before a late Miami uprising cut the difference to two before 50.7 seconds left.
Miami could have taken the lead but Butler missed a three-pointer while Smart added two free throws 11.4 seconds ago to seal the four-point victory.